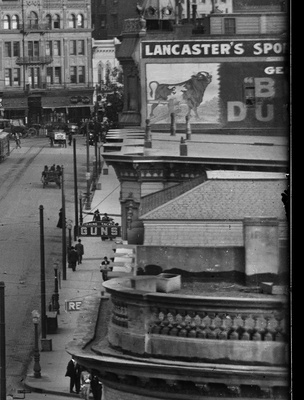 Lancaster's Sporting Goods (also Lancaster & Lancaster) was a sporting goods store at 109 San Pablo (1511 San Pablo after renumbering) in the 1910s. It was run by William J. Lancaster and his brother Clarence H. Lancaster.

It was in business beginning about 1906 2 to at least 1913. The 1913 directory suggests they moved a few doors up San Pablo to 1529 San Pablo. In the above photo excerpt, the painted sign for "Bull" Durham Tobacco is on the side of the 1511 location. The hanging "Fishing Tackle / Guns" sign is about where 1529 would have been.

In the 1916 directory, Clarence is listed as a salesman for Rittigstein & Son Marine Hardware and Ship Chandlery, and William as an instrument maker, so it seems to have closed sometime before then. 3

William was a machinist before and after this venture, but Clarence later was manager of the sporting goods department at Maxwell Hardware. 1 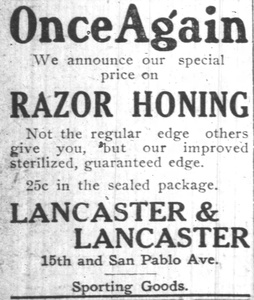 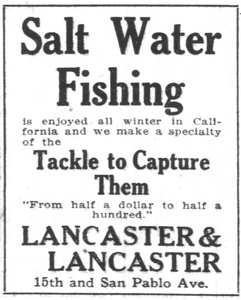 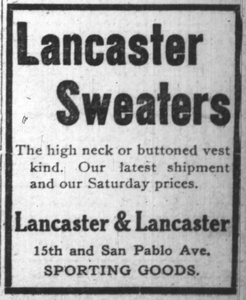