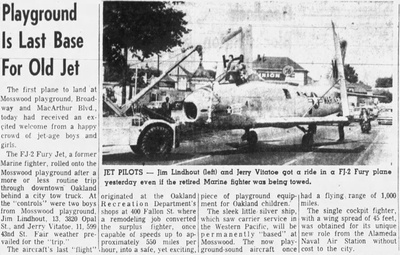 Does anyone remember the airplane in the playground of Mosswood Park? It was a real plane that children climbed on and through, and was there in the 1960s and perhaps into the 1970s. Not sure when the plane was removed, though probably it was taken out of the park for safety concerns. The airplane sat in an area by itself next to the older children's playground on MacArthur Boulevard. The tot lot was next to the J. Mora Moss House.

The plane was an FJ-2 Fury, the Navy version of the F-86 Sabre. It was "remodeled" at the Parks and Recreation shops at 400 Fallon Street then towed along the streets to Mosswood Park. Jim Lindhout, 13, and Jerry Vitatoe, 11, got to ride in it while it was moved. 1 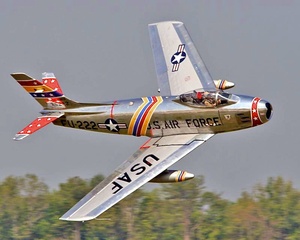 I’m certainly of the right demographic to have been magnetically drawn to such things, and it seems to me I do vaguely recall such a plane. But as we were rarely allowed to go to Mosswood (my single clearest memory of the place is of attending a haunted house in the basement of the Moss cottage) and I’ve been shut up/down by web-based evidence before, I’m not sure my memory isn’t conflating with whatever was left of/at Peralta Playland by the time I came along. Heck, at one time it seemed like every other park in Oakland had at least one WWII or Korean War era fighter plane lying around somewhere. But I’m not avoiding the question. Someone online claimed to remember the Mosswood plane as having been an F-86 Sabrejet. That’s the proper vintage for your timeframe. Does this photo ring any bells? (Of course, had it been off the ground like this, I definitely would remember better.) -Mike

Thanks for the tip! By searching for Mosswood Park and "F-86" have located the post about the "F-86A in Mosswood Park in Oakland in the '60s ..."