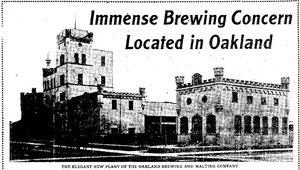 Picture of OBAMC's plant
Oakland Tribune, December 22, 19072The Oakland Brewing and Malting Company, not to be confused with Oakland Brewing Company, brewed the first lager produced in Oakland - Blue and Gold Lager.1 The company's brewery opened on May 15, 1907.2  C. S. Plaut was the president and general manager of the company, and Joseph Kogler served as brewmaster.1  In 1912, the company published the Blue and Gold Cookbook.

image from http://www.brewerygems.com/independent.htmDespite the large sums spent to establish the brewery, it only lasted for about 12 years, due to the impacts of the first World War and Prohibition.  An article published in the Oakland Tribune on December 1, 1918, announced that the brewery had been shut down as of midnight, November 30, and that the company stated that the plant was to be dismantled, with the buildings remodeled for other manufacturing uses.3  This closure was required by a presidential proclamation intended to conserve fuel, transportation and grain for dairy food as a war conservation measure, and which took effect despite the fact that an armistice had been signed on November 11, 1918.4

It appears that this closure was temporary, and the brewery actually resumed brewing "near - Beer" (with 2.75% alcohol) some time later, although production of this limited alcohol brew seems to have terminated in April 1919.5  Given that Prohibition barred the production of any beverage with an alcohol content above 0.5% as of January 20, 1920,6 it is almost certain that this closure in 1919 was permanent.  The 1951 Sanborn map for the property shows that it was then in use by Golden State Co. Ltd., a large milk bottler which at one point "handled almost a third of the milk" sold in California, and which later purchased Fentons and then became part of Foremost Dairies. 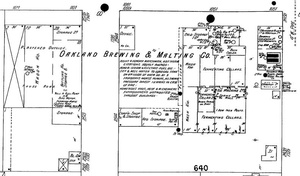 [need to examine Polk's or other Directories to determine what happened to the buildings between 1919 and 1951, and then after the dairy left..]