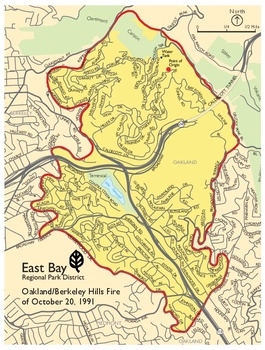 from The Oakland Hills Firestorm 1 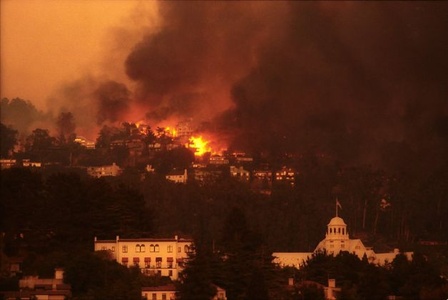 View of the Oakland Firestorm above the Claremont Hotel on October 20th, 1991

The summer of 1991 had been a hot one in the Bay Area and the warm, dry conditions continued into Autumn. Underbrush had dried out in the drought conditions and eucalyptus trees were dried out from a freeze the previous winter. All of this set up very dangerous conditions in the hills above Oakland.

On Saturday, October 19th, firefighters battled minor fires in the tinderbox conditions, but the 5 alarm, 5 acre brush fire was reportedly under control by evening. It was considered too dangerous to continue cleanup operations on the steep slopes in the dark, and the fire was thought to be out.

But on Sunday morning, the 20th, some of the hot spots were still smoldering, and firefighters knew they were in big trouble as a hot, dry Diablo wind was beginning to blow from the east. With temperatures in the 90s and humidities in the single digits, the powerful hot and dry easterly winds blew out Oakland Berkeley Hills over the city at up to 65 mph.

At 10:58 a.m., the first alarm was sound as one of the smoldering fires from the day before flared up. The fire quickly exploded on three fronts as short staffed firefighters struggled to get their equipment in place. As the increasing winds were concentrated by the steep terrain, the fire was whipped into a conflagration the likes of which this nation has not seen since the Great Chicago Fire – a firestorm. 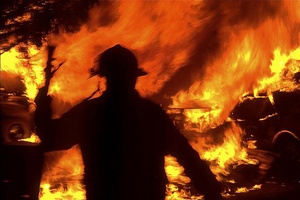 photo CC BY-NC 2.0 by CAL OESThe flames completely destroyed the Hiller Highlands neighborhood of 1,800 town homes in a matter of minutes. As firefighters retreated before the rapidly advancing flames, panicked residents fled down the winding roads, eventually having to abandon their cars and flee on foot.

Over half of the fatalities were in automobiles that were burned up on the winding roads. Firemen watched helplessly as reservoirs were drained of their water due to the firefighting effort. If the Diablo winds had not died down that evening, the inferno would have threatened downtown Oakland.

Twenty five people would die in the disaster, including one firefighter and one policeman. Three-hundred-and-seventy fire companies from around the state responded to the fires, involving over 1,800 firefighters. The fire caused $1.5 billion in damage. The Firestorm Memorial Garden was built to commemorate the lives lost in the firestorm.

One of the major contributing factors to the inferno was the dense landscaping vegetation of eucalyptus and juniper that surrounded the expensive homes in the hills. Public awareness efforts followed the fire to try to reduce the hazard caused by the highly explosive vegetation. 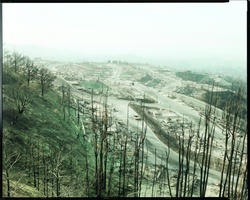 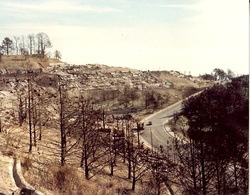 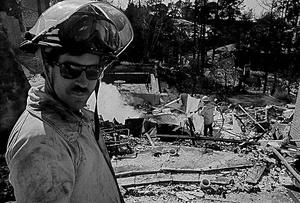 firefighters putting out the last of the fire, photo CC BY-NC 2.0 by CAL OES 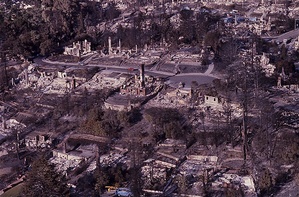 Shot from a helicopter, photographer Robert Eplett captured this image of dozens of burned down homes and scorched trees after the 1991 fire, photo CC BY-NC 2.0 by CAL OES 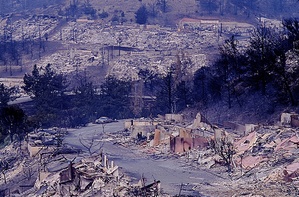 damage in the hills, photo CC BY-NC 2.0 by CAL OES 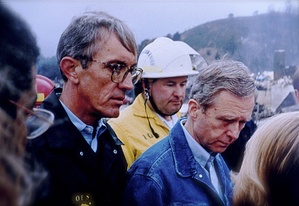