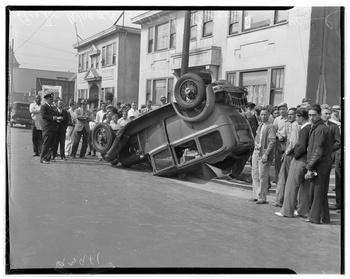 The 1936 accident at 42nd and Grove (now Martin Luther King, Jr. Way) is a photo from the UC Berkeley Bancroft Library, San Francisco Examiner collection. Not all photos in the collection were published, but this one was, so it's possible to learn a bit more about what happened. It was also reported in the Oakland Tribune.

The accident occurred Thursday, August 27, 1936. A car driven by Mrs. Eddie Carlile, age 60, of Broadway Terrace, struck a car driven by Don Holm, age 32, of 53rd St. in Emeryville, causing Holm's car to flip. Mrs. Carlile was uninjured, but Holm was "severely injured", and taken to the Berkeley Emergency Hospital for treatment of contusions and abrasions. Reading the headline in the SF Examiner, one might think it was fatal: "Autoist Crushed", 2 but he survived and lived to the age of 70.

The Tribune was a bit less sensational; it wasn't even the lead story in the article, and was under the subhead "Driver Injured". 3 It's also interesting to compare the photo as shot, 1 and the more interesting composition created by the editor's crop. 2

The building at the left edge of the uncropped photo is probably the old Sacred Heart Church. 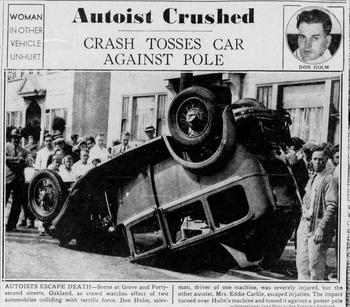 Although they've been modified, the apartment buildings in the background of the photo still exist. 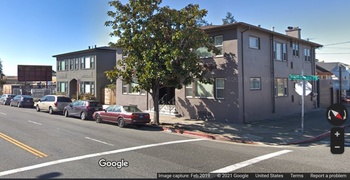