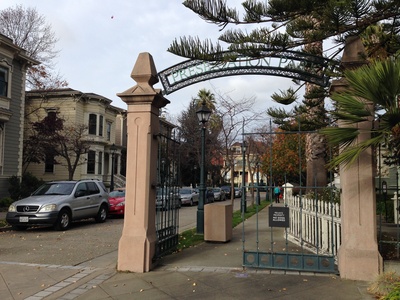 Outside the main entrance to Preservation Park, Oakland, California. (picture by philip)

Preservation Park is a Victorian neighborhood encompassing a two block area of Downtown Oakland. Of the sixteen historic homes in Preservation Park, the five on the north side of 13th Street are on their original sites, part of a ring of Victorian residential neighborhood fragments at the fringe of Downtown, while eleven were moved onto the sites in order to spare them from demolition. The area is now used as an event space, and the buildings are offices for various non-profits plus a small cafe.

"In its 125-year history, Preservation Park has experienced life cycle changes common to many urban areas. The community started out in the 1870′s as an upscale residential neighborhood made up of elaborate Victorian homes. By the 1970′s, however, many of the large homes had been subdivided into rooming houses and the neighborhood had deteriorated into what planners at the time considered “redevelopment” material. All but five of the structures on the two-block site were demolished. The construction of a new freeway adjacent to Preservation Park also threatened to destroy a significant percentage of the neighborhood’s historic Victorian homes. To preserve these historic assets, the City of Oakland created a public/private partnership to relocate the endangered buildings and to renovate the regrouped residential structures for a new life as a business neighborhood.

Today, Preservation Park does indeed have a new life: 16 turn-of-the-century buildings have been renovated, and with their facades restored, are set among manicured lawns and lush plantings, complete with Victorian park benches and street lamps." 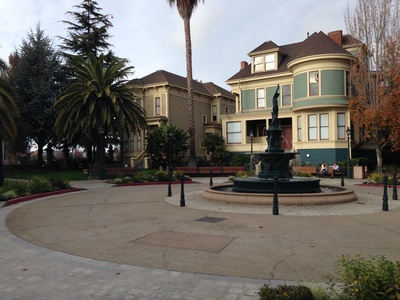 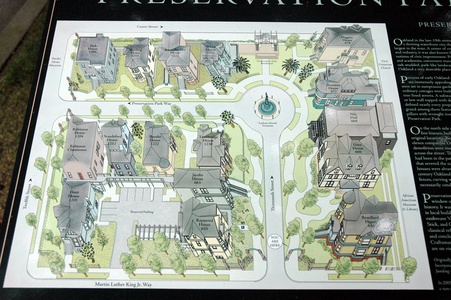 The original route for the Grove Shafter Freeway (CA 24 and I-980) would have been one block east of where it is, and would have destroyed not only the homes in Preservation Park, but the First Unitarian Church and the Pardee Home. Most of the freeway was completed in 1969-1970, but the last section (I-980) wasn't completed until 1985 because it was held up by lawsuits.

As noted above, the 5 buildings on the north side of the park on 13th Street are in their original locations. The other buildings were moved to Preservation Park from various locations in Oakland.

Planning for Preservation Park began in 1975 by the Landmarks Preservation Advisory Board. Under the Oakland Office of Economic Development, the project began in 1976. Because of budget problems, and the time required to restore the houses, it ended up taking even longer than the 10 years originally planned. Restoration of the 5 original houses didn't begin until 1982 1 or 1985.

In 1988, Bramalea Pacific, the developer of nearby City Center, gave $4 million for the project in exchange for the first lien on the property and the opportunity to be the construction manager for the project. At that point only 5 houses had been restored. 2 Oscar Coffey, Jr., president of Chamber Center Developers (one of the existing developers) favored tearing down the 11 unfinished houses and building a traditional office building. He said the preservation plan was no longer viable because of changes in tax law. 2

The project was finally completed in 1991, and completely leased 18 months later. The project is now managed by Preservation Park Center, Inc., a nonprofit partnership between East Bay Asian Local Development Corporation and the tenants of Preservation Park. 1