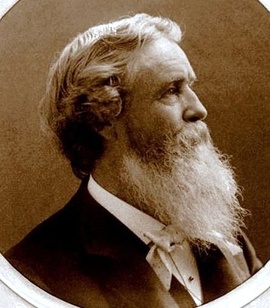 Thomas Byron Hill (September 11, 1829–June 30, 1908) was a landscape artist whose paintings of California and Yosemite landscapes embody the spirit of the American West.

Hill was born in England in 1829, and his family immigrated to the U.S. about 1844. He married Charlotte Elizabeth Hawkes (1833–June 8, 1903) in 1851. (Note that some records refer to her as Charlotte Mathilda.) Thomas and Charlotte had 9 children, 2 of who died in infancy. A number of the children became artists in their own right:

The family moved to San Francisco in 1856. Hill is well-known for paintings of Yosemite, but one of his most famous paintings is The Last Spike, painted in 1869, depicting the completion of the transcontinental railroad which had its terminus in Oakland. 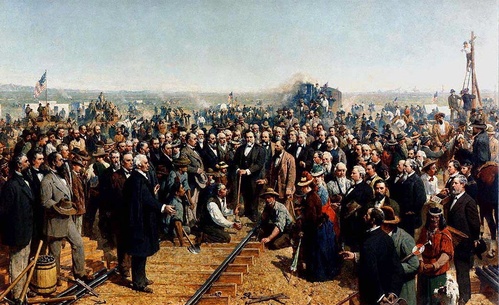 Hill retreated from the San Francisco art scene in late 1879, moving to his new home at 4208 Piedmont Avenue opposite Howard Street (now Ridgeway Avenue), in Oakland. The 1902 Sanborn maps for the area showed that 4208 Piedmont was one of four separate houses on a large lot set far back from Piedmont Avenue, and accessed over a bridge across Cemetery Creek (now commonly known as Glen Echo Creek). By the time the 1911 Sanborn map was prepared, the house had been removed, Entrada Avenue had been laid out across the bridge, and the lot subdivided into a number of smaller parcels. The house at 41 Entrada Avenue was constructed on the approximate site of Mr. Hill's former residence. [Note: this discussion of his house at 4208 Piedmont seems to be incorrect and based on an erroneous or illegible caption on the picture below, and his house actually seems to have been at 4203 Piedmont.  More to come]

This is from the May 01, 1952 Oakland Tribune -  I have run across many references to his home being on Seminary Ave. 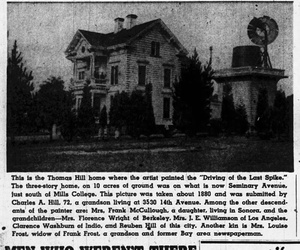 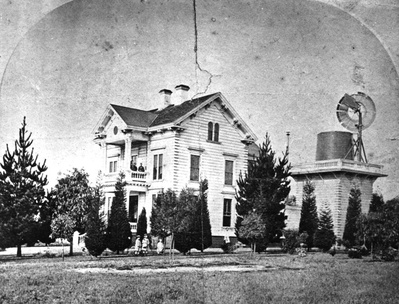 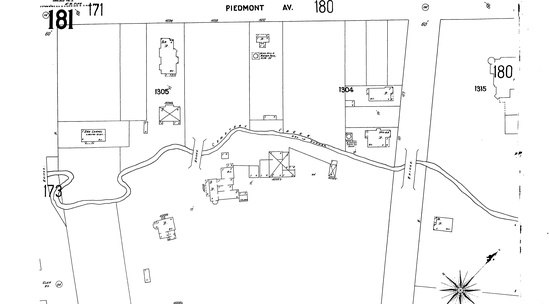 Thomas and Charlotte had marital problems and were estranged in the 1880s. Thomas traveled a great deal seeking ideas for his art, and eventually settled in a studio near Yosemite.

In 1886–87, Thomas was briefly director and instructor at the San Francisco School of Design, following the death of the former director, Virgil Williams. 5

While on a trip to Mexico in 1899, Hill was briefly stricken with paralysis. 6 Some newspapers reported he was dying, until his son wrote and said he was recovering nicely.

In 1902, there was a display of members of the Digger tribe from Yosemite at the ferry building in San Francisco. "The plan is to have a regular wigwam set up in the depot, with the Indians making baskets, and there will also be a little papoose displayed in a papoose basket." Along with $1,000 worth of baskets, there were paintings of Yosemite by Hill on display. The display was organized by Willeta Hill 7 N.B. article lists her as Hill's daughter, but Willetta Hill was Thomas Hill's daughter-in-law by his son Edward Rufus Hill. Willetta's maiden name was Willetta O. Smith, and she lived with Thomas at the end of his life. The 1900 census shows Thomas Byron Hill (70) and Willetta (41) living together near Wawona.

Although he was living near Yosemite, upon hearing of Charlotte's impending death in 1903, Thomas returned immediately to Oakland and they reconciled before she died. 4

In his later years, Thomas lived and worked in a studio in Wawona near Yosemite. He died June 30, 1908 in nearby Raymond, California, and is buried in Mountain View Cemetery. 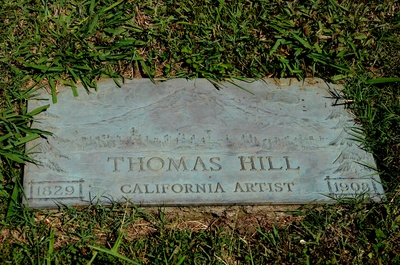 I really believe that the picture is of Thomas Hill's home on Seminary.   Hill sold his home to Captain Nelson in 1886.  Here is the ad for 10acres of land, modern home with 11 rooms and a windmill.  https://www.newspapers.com/clip/80278860/the-thomas-hill-place-for-sale-i-belei/. and here when the Nelson took possession.https://www.newspapers.com/clip/80278924/captain-nelson-purchases-thomas-hill-hom/