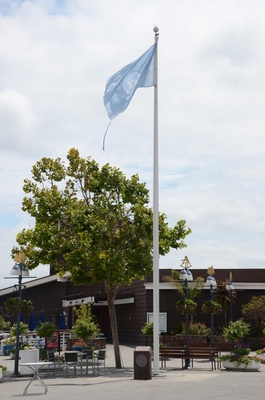 You may be wondering why Oakland was the first city in Northern California to fly the UN flag, 2 when the United Nations Conference on International Organization in 1945 to found the UN was held in San Francisco. The trustees of the War Memorial Opera House refused to give the flag a permanent home. The United Nations Association then asked the Port of Oakland to accept the flag, which they did. 5

Flying the flag at Oakland was not without controversy. People showed up at the port commission meeting to object, saying the UN was working towards "Communist control of the world." 5 A number of people wrote letters to the Oakland Tribune voicing their opposition to flying the UN flag. 4

Despite the protests, the flag and flagpole were raised as planned. Arthur Goldberg, US Ambassador to the UN, spoke at the dedication ceremony on March 25, 1966. 1 Goldberg was introduced by Dr. C. Eaton Rothwell, president of Mills College, who was executive secretary of the U.N. at its founding. Goldberg later spoke at UC Berkeley's Charter Day celebration, which was met with anti-Vietnam War protesters. The Fremont High School Band played the National Anthem, and an honor guard from Fremont High School (Robbie Curren, Mario Rivera, Stephen Wilson, and Sherman Hankins) raised the flag. A lone protester, Herb Middleton, representative of the Christian Technocracy, held a placard protesting the UN's "pro-communism." 3

On the 30th anniversary of the founding of the UN in 1975, a commemorative plaque was installed near the flagpole at Jack London Square. The plaque reads: 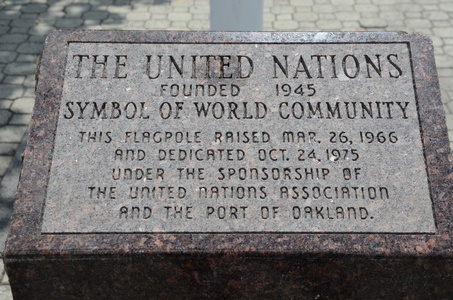 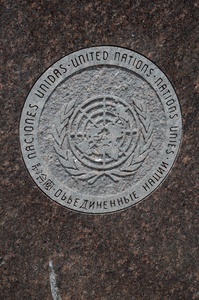 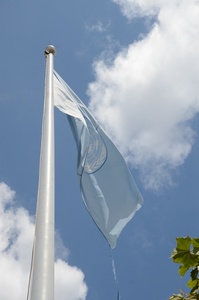 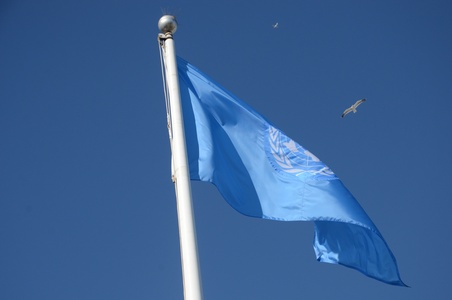