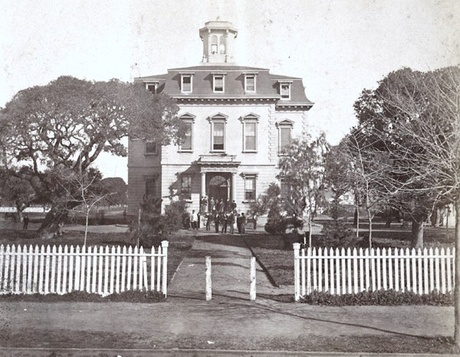 The roots of today’s University of California system can be traced to downtown Oakland in 1853, with the private Contra Costa Academy founded by Rev. Henry Durant. In 1855 the academy became the College of California:

“… in 1855 a charter had been obtained from the State Legislature. But the times, to quote [J. C. Rowell]’s own words, “were far from propitious; the lure of gold and the frantic race for wealth (too often wiped out by fire and flood) dominated men’s other interests. And five years elapsed before the doors swung open to welcome the first few students.” The College was situated on four blocks of land on what were then the outskirts of Oakland. The property faced south on Twelfth Street. A small Jewish cemetery lay to the north, and the eastern boundary was the edge of Samuel Merritt’s orchard, now Harrison Street …”4

At the time, it also had classes for younger men as well as college courses. The preparatory school was referred to as the Collegiate School, and was very highly regarded. 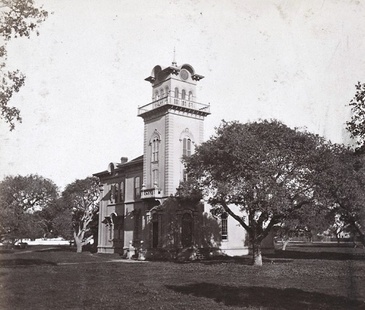 College of California (1860/1870) 3In 1867 Governor Frederick Low responded to calls for a “state university” by proposing that the existing College of California be rolled into any such plan. On March 23, 1868 Low’s successor, Gov. Henry Haight, signed the “Organic Act” establishing the University of California, and Rev. Durant’s College of California became the College of Letters (now Letters and Science). The next year (1869) the new institution officially became a university; Durant was its first president, retaining one teacher from his earlier institution for a staff of about 15 teachers. The university remained in Oakland until the Berkeley campus opened in 1873 under the third UC president, Daniel Gilman. UC may have lasted only 4 years here, but NEVAR 4GET that it was Oakland what got Cal’s whole ball rolling …

Brayton Hall was one of the main buildings on the campus; later, it morphed into the Dietz Opera House. College Hall was at the northeast corner of the campus, and was the last building remaining of the former campus by 1903. 6

According to Pacific Education Journal, Volumes 1-2: "... Clinton Day, the well-known architect, and Charles A. Wetmore, Chief Executive Officer of the State Viticultural Commission, made up the class of 1868; and of the four who graduated in 1860, E. T. Fowler, now Principal of the Prescott School, was one. The management of the College School was placed almost entirely in the hands of Dr. Brayton.  The attendance was good, and the accommodations small.  There was no money on hand to build new schoolrooms. Dr. Brayton advanced the money and went ahead with the work. The building which now forms the basis of St. Paul's Episcopal Church had been erected on the block with the original school building. This was moved over on the south side of Twelfth street, near Webster, and the building known as Brayton Hall was erected. This building has since been moved and remodeled, and is now Dietz Opera House. 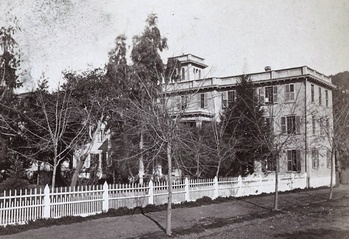 Mansion House, College of California campus (circa 1860/1870) 3 The dining hall building was also built.  It afterwards stood at the corner of Broadway and Lover's alley (Fourteenth street), and was recently purchased by Dr. Enoch H. Pardee, and moved on his San Pablo Avenue property.  It is known as the Mansion House.  The "Spanish Building," erected at about the same time, was moved to the northeast corner of Webster and Eleventh streets, became Dr. Merritt's Great Western Hotel, and was burned down during the Grand Central fire.  The tankhouse now does duty as a Chinese laundry, on Delger street, near Telegraph avenue.  During this time there was also erected the main College building, now located at the northeast corner of Twelfth and Harrison streets, and occupied by the Dexter Livery Stable and the Acme Athletic clubrooms.  The money expended in making these improvements was furnished in large part by Dr. Brayton, and he soon came to have a sort of controlling interest in the entire property of the College and school in Oakland.  The College had acquired, however, some 100 acres of land in Berkeley, which the Trustees expected would ultimately become the College site." 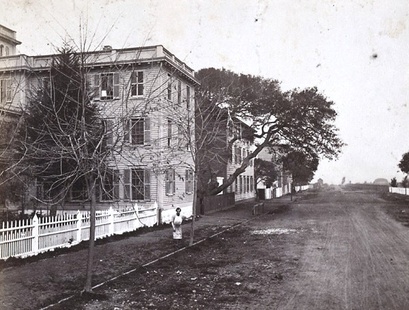 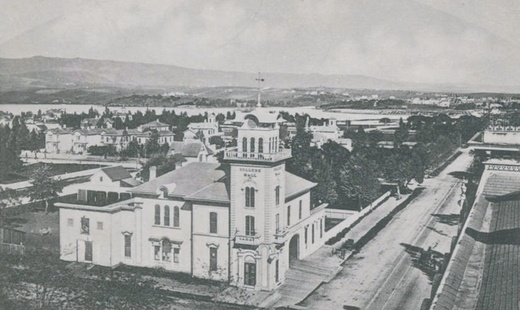 College Hall, College of California, located on the corner of 12th and Harrison Streets.  When this photo was taken the building was being used by the Club Stable. (1892) 5 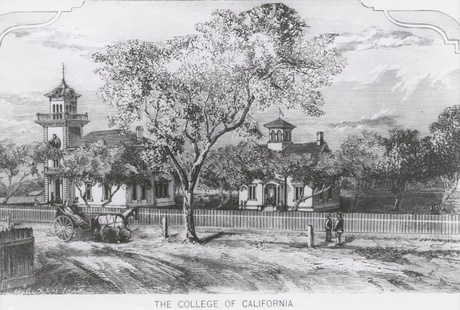 The former location of the campus is commemorated by State historical plaque #45.  This plaque was originally installed on a wall of the Merchants Garage at the northeast corner of 13th and Franklin Streets, and is now installed within a glassed-in enclosure on Franklin Street just south of 14th Street on the Atlas building that replaced the garage. The developer of the Atlas building explained that they "had the plaque professionally cleaned, rebronzed and refinished, then put in secure storage during construction. It has now been re-installed on the Franklin Street side, near 14th Street. It is in a lit case, enclosed by glass to prevent theft or vandalism." 8 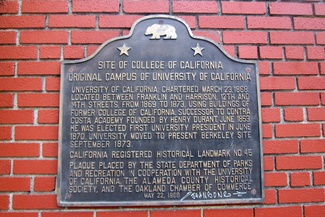 photo of plaque in its original location
by Wally Gobetz  CC BY-NC-ND 2.0 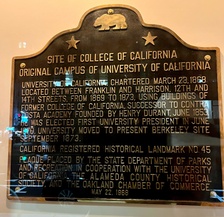 photo of plaque in the current location
by NAParish

In 1864, the Daily Alta California listed that there were four seniors, three juniors, three sophomores, and seven freshman for the upcoming term. 207 students total were listed, "of whom 123 are boarders, and 87 day scholars." [sic] 7