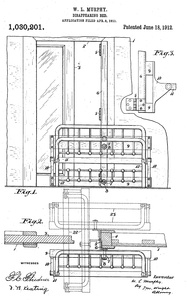 Wall beds, also known as Murphy beds, are beds that are designed to fold up into a closet or cabinet when not in use. Wall beds from different manufacturers were used in a large number of apartments around Oakland. Brands used locally include Marshall and Stearns (or Marshall-Stearns) and Rip Van Winkle

Murphy beds are named for William Lawrence Murphy, an Irish immigrant in San Francisco who needed to find a creative method of making space in his small apartment. 1 He was not the inventor of disappearing beds, but filed a number of patents around 1900.

"It appears that the art of constructing disappearing or concealed beds has been followed over a period of more than 70 years, during which time more than 800 patents have been issued for inventions in improved structure in such devices." 2

The earliest references to wall beds in the Tribune appear around 1906. One of the first references to a specific brand came in 1907 in an ad for rooms at the Muri-Ell Apartments which refers to Marshall-Stearns patent beds. 3

It appears Marshall and Stearns started in the real estate in Los Angeles in the early 1900s. By 1904, they were also running ads for W.C. James patented fixtures as a way for landlords to help maximize "economy of space" and "profitable rents". 4 By 1906 they were running ads referring to Marshall and Stearns Company patented wall beds, and had offices in San Francisco and San Diego. 5 At some point they opened a branch in Oakland; in 1922, their Oakland branch was at 1774 Broadway. They later called their beds Add-A-Room beds. 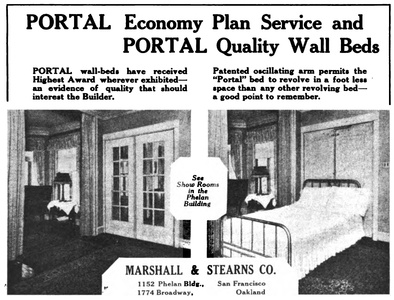 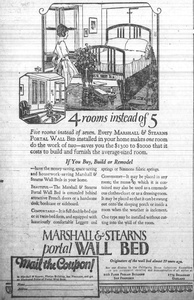 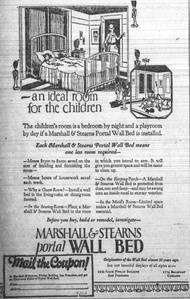 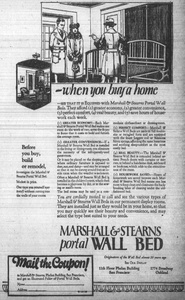 The Inco Wall Bed Agency at 1110 Madison St. appears in exactly one new apartment listing in Oakland, the Rudonia Apartments in 1929. 6 Relatively few mentions can be found in any newspapers available on newspapers.com. 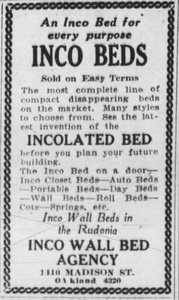