Say, boys, do you remember Marshall Curtis, the old housemover in the '60's, and his eight oxen? How easy it was for him to move house. Whether it was large or small, he just jacked it up, put two long timbers under the house, then four high wheels at the ends of the timbers. Sometimes he used four oxen and sometimes six or eight, according to the size of the house; when everything was ready he would just say "Gee" or "Haw" to the oxen and off they would go with the house. At times he would have to go several blocks out of his way on account of the oak trees in the streets. Often the family would live in the house all the time it was being moved, and wherever night found him with the house, that's just where he would leave it until next morning. When we boys wanted to have a little fun with Curtiss, all we had to do was say "Gee" or "Haw" to his oxen and get them going the wrong way; then he would chase us away with his big whip.

At the southwest corner of Clay and Fourteenth streets, there was a small fresh water pond, and we boys used to wade in the pond, but the owners would chase us away. We used to get even with them sometimes by hunting up dead dogs, cats or other animals that we could find and drag them into the pond, which would keep him busy trying to keep his pond clean.

Who was the boy that came from Auburn and had never seen a street sprinkler until he hit Oakland, then stopped the man on the sprinkler cart and told him his barrel was leaking, and he was losing all his water? I think it was Ed M. H. Enough said this time, 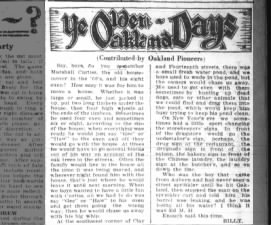