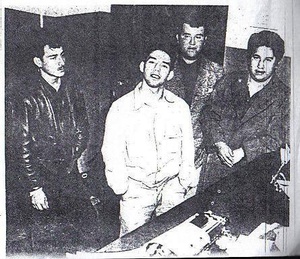 Picture from the Tribune of Pachuco Youth being booked into Oakland city jail after city-wide raids on gangs on February 18, 1949. image courtesy of OW editor's personal collection.

Zoot Suits was a clothing style that was popular in the 1940's. It takes it origins from Harlem, New York and the jazz scene in Harlem. The Zoot Suit was a baggy suit that consisted of a big pork pie-style hat, usually called a "Tando," a long coat, baggy pants worn high at the waist and wide at the knees and tapered at the ankles, and a duck tail-style hair cut. It was particularly popular with youth of color and working class youth.

The Zoot Suit became popular on the West Coast with Mexican American or Chicano youth. Zoot Suited Mexican youth were called "Pachucos," a word that originated in Mexico meaning "punk" or "delinquent." Many of the Mexican Latino youth and black and white youth wore these suits to parties and dances, but some formed gangs. Discrimination and criminalization of youth that wore these suits became very common. This suit was popular during World War II: at that time there was a lot of rationing of garments going on and the Zoot Suit required a lot of material.

In Los Angeles there were two events that criminalized and demonized Mexican Chicano youth that wore Zoot Suits. The first was the "Sleepy Lagoon" case. The morning of August 2, 1942, a man named José Díaz was found dead. This led to a mass arrest of members of gangs, and 24 members of the 38th St Gang were sent to prison for murder without any evidence. A Sleepy Lagoon Committee was formed, made up of many famous Hollywood actors including Anthony Quinn and Rita Hayworth. In October, 1944 the 24 members were released from prison after an appeal.

Another incident was the "Zoot Suit Riots" in June, 1943. Clashes between sailors and Mexican American youth in Zoot Suits sparked an all-out attack on any Mexican youth and adults by sailors, the LAPD and white citizens. Blacks and Asians were not spared from the violent attacks. Youth in Zoot Suits were stripped and left naked on Los Angeles streets and then arrested by police. Los Angeles was declared out of bounds to military personnel to calm the violence.

Oakland wasn't spared of this violence or Anti-Zoot Suit, anti-Mexican sentiment, either. Mexican, Black and working class youth in Oakland, especially Portuguese, adopted the Zoot Suit style. On June 11th, 1943 two Mexican American shipyard workers from West Oakland named Rodrique Encarnacion and Leo Valasques got into a scuffle with some sailors and soldiers on the corner of 8th St and Washington. Oakland Police raided a local hotel after the fight and arrested the two men. The Oakland Tribune had headlines the next day: "Pachucos attack Sailors." 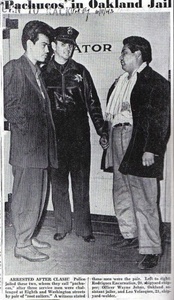 On November 23, 1943 a brawl broke out in Alameda on Park St. involving several members of an East Oakland Zoot Suit gang calling themselves the "23rd Ave Gang," a mixed Portuguese and Mexican gang. The 23rd Ave gang said they went into Alameda to fight a Gang calling themselves "The Okies" after The Okies allegedly beat one of the members of their crew. The 23rd Ave Gang got into a fight with some Okies and sailors in front of a movie theater a riot broke out. Several Alameda Police had to shoot in the air to break up the melee. After the riot, several members of the 23rd Ave gang were arrested in their East Oakland homes during a gang raid.

On January 31, 1944 a huge brawl and riot broke out at a Mexican dance at the Jenny Lind Hall on 21st and Telegraph Ave in Downtown Oakland (now known as Uptown). Several people were injured it took Oakland Police and Navy shore police to break up the fight. A sailor named Delmar Boiker was stabbed in the back. Another person was stabbed and later arrested: Santiago Cadena, a Mexican war worker from West Oakland who was dressed in a Zoot Suit. 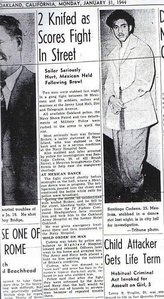 According to the book Six Gold Stars by Dexter Mast, a former Oakland Police officer, there were several anti-Pachuco raids in Oakland. He said that the Oakland Police would arrest any youth in a Zoot Suit, strip them and force them to get a hair cut because most Pachucos wore a duck tail style hair cut. The book also talked about a white Pachuco named Lewis Taylor and how the police would routinely harass him and force him to cut his hair and even stripped him of his Zoot Suit clothing before arresting him for vagrancy. This behavior suggests a direct link to the Gang Injunctions in Oakland.

Even as recently as February, 18 1949 there was an article in the Oakland Tribune about a raid on Pachucos in Oakland. Several members of Pachuco gangs were arrested in West and East Oakland on several charges including robbery and assault with a deadly weapon.  The Pachuco Zoot Suit culture was still alive and well in Oakland at this time, as was the anti-Zoot Suit hysteria. 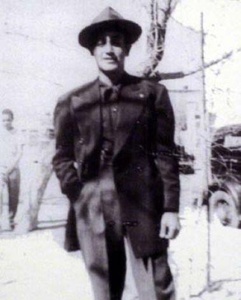 Eduardo Carrasco was a Zoot Suiter and Pachuco in West Oakland in the 1940's.  image courtesy of OW editor's personal collection. 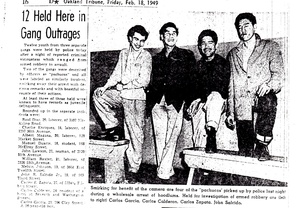