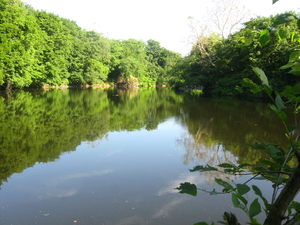 NOAA Photo The Blackstone River begins in Worcester, MA "and flows southward until it flows over the Slater Mill falls into the Seekonk River at the head of Narragansett Bay." 1

The Blackstone played an important role in the early industrialization of New England, with Samuel Slater's mill becoming the first successful water powered cotton-spinning factory in the United States in 1790.