I currently live in Gilbert, Arizona and I recently started to explore the theater because of the highly popular Broadway play Hamilton.  I have yet to see the famous play, but until I do, I figure I might start off small at The Hale Center Theatre, which is considered to be the best in the valley.

The Hale Center Theatre is a historical part of Gilbert, Arizona located in the historic downtown.  The Hale Center Theatre has been a staple in the community as a prolonged historical organization, which is privately owned and operated community theater company in the United States of America. The founders of the theater were Nathan, and Ruth Hale married in 1933 and wrote, starred, and produce plays. Eventually, they relocated to Glendale, California from Salt Lake City in 1943 with having dreams of being actors, and came to a conclusion after many failed attempts of trying to break into the movie business the only way to succeed in Hollywood was to open their own theater.  They pursued their dream by renting a small building in Glendale, California, and named it The Glendale Centre Theatre.

“It’s an exciting life, full of stress and strain, yet there’s never a dull moment when you’re in this business!”
– Ruth Hale

The Story of the founders

The current owners of The Hale Center Theatre established ownership in 2003 by Dave Dietlein who discovered the acting bug at the age of two.  Dave had the advantage of growing up living directly behind his family owned and operated theater.  Dave caught on to entrepreneurship which led to the start of selling radishes at the age of four years old.  He moved on to selling glass soda bottles by getting a refund from the store. During his teenage years, he discovered music and became a DJ, calling himself “The Disco King” which turn out to be very lucrative and paid for college and his first car.

Dave graduated college and proceeded to work in the family business of the theatre. David worked with his dad, Allan Dietlien in hopes of owning a theatre.  Allan Dietlein was known as a very strict overseer and wanted to show Dave that even though theatre can be rewarding, it can be hard work!  Dave and his brother purchased the business once their parents retired.  During ownership Dave still wanted to own a theater, and he sold his part of the theater called Glendale Center Theatre in Glendale, California.  Reluctantly, Dave decided to move to Gilbert, Arizona. After being convinced by Greg Tilgue, who is from the Gilbert city fathers.  Once, David moved to Gilbert, Arizona., he proceeds to get a loan from the bank along with savings he began construction on the Hale Centre Theatre.

A tour of The Hale Center Theatre

I experienced The Hale Center Theatre without being in attendance at the community play only because the play I waited too late to purchase a ticket.  Instead, I took the liberty of walking around the theatre building.  I had the pleasure of taking a photo while the play Thoroughly Modern Millie was letting out and a few photos of the outside building.  The only disadvantage I noticed was the parking due to the fact its located in the historic downtown Gilbert, parking can still become a challenge even though there are the huge parking lot and parking garage adjacent to the theatre. My take on the aesthetics of the building is that it has a modern feel with an old world charm appeal in honor of the founders Mr. and Mrs. Hale. The attendees of the play were outside and seemed extremely friendly, and it gives me the feeling that when I do attend the show, I will have a delightful experience. 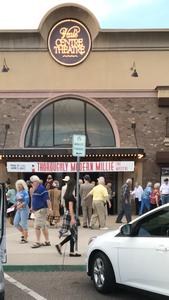 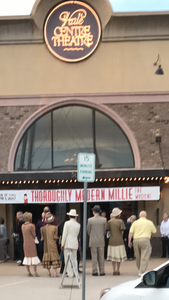