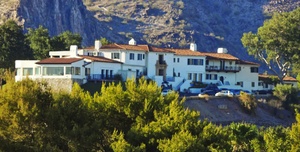 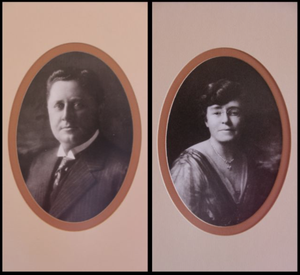 Born in Philadelphia, Pennsylvania, on September 30, 1861, William Wrigley Jr. was the American chewing gum tycoon. Wrigley's fame came from his entrepreneurial attitude. He moved from Philadelphia to Chicago in 1891 to start his own business. He began with selling Wrigley Scouring Soap, when the sales were low, Wrigley added incentives. He started with adding a small amount of baking powder to each Scouring Soap order. He quickly realized that the baking powder was more popular than the soap itself. Once again, he found himself in the same cycle, when the baking powder sales were low, he added chewing gum as an incentive. This is what jumpstarted Wrigley's fortune and fame.

William Wrigley Jr. began investing in new projects. He played a monumental role in the development of Santa Catalina Island in California. He enhanced the island with better utilities, new steamships, a hotel, and Avalon's Casino, adding attractive landscape to the island. Wrigley also created an enterprise that would employ many residents on the island called the Catalina Clay Products Tile and Pottery Plant. 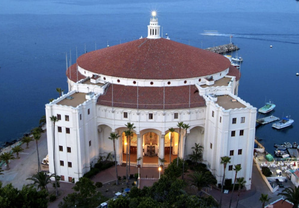 William Wrigley Jr. did not stop chasing success, he also bought a minority stake in the Chicago Cubs, a baseball team headed by Charles Weeghman. As Weeghman's business slowly declined, he sold all of his ball club stock to Wrigley, and by 1921, Wrigley was majority owner of the Chicago Cubs. Following his success with the team, the Cubs' ballpark, Wrigley Field, was named for him. 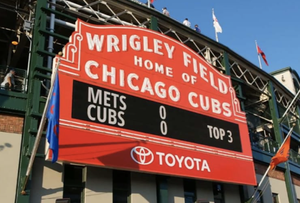 Wrigley's presence in Chicago did not stop at Wrigley Field. In 1930, Wrigley donated a six-story factory building to the Salvation Army to house the unemployed. The building was called New Start Lodge, but was quickly renamed Wrigley Lodge. 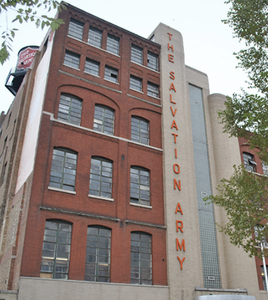 Wrigley would bring the Cubs to Catalina Island, his beloved home, for spring training. After almost 30 years, he decided that the trek from Chicago to Catalina Island was too far, so he settled with Arizona, where the Chicago Cubs still practice spring training. Wrigley loved the West Coast and decided to partially finance the Arizona Biltmore Hotel in Phoenix, Arizona.

Wrigley spent a good amount of time in Arizona, he decided to build a winter "cottage" in 1931, which we now know as The Wrigley Mansion. The Wrigley's winter cottage may also be known as William Wrigley Jr. Winter Cottage and as La Colina Solana.

The home itself was designed by Earl Heitschmidt as a 50th-anniversary gift to Wrigley's wife, Ada, for $1.2 million in 1931. The mansion included 24 rooms, 12 bathrooms, and about 16,000 square feet. There are low stepping, spiral stairs in the foyer of the house, designed the low steps for his 5 foot tall wife. Many visitors mention that the chairs in the mansion are also very low, this was to accommodate Ada's height. There is a player's piano in the first floor living room that was deeded to the home, meaning it can never be moved. Ada and Wrigley each had their own bedroom and bathroom, connected by their closet. Philip and Dorothy, their children, had rooms down the hall, each room in the house had its own fireplace. The tilework in the home was shipped from Wrigley's tile factory in Catalina Island, connecting all of his successes. The mansion offers breathtaking views of the Phoenix mountains and the beautiful city below. The style of the home pulls from elements of Spanish, California, Monterey, and the Mediterranean. 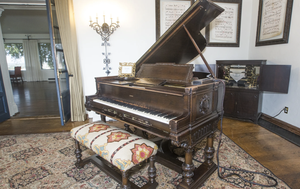 The piano that was deeded to the house. 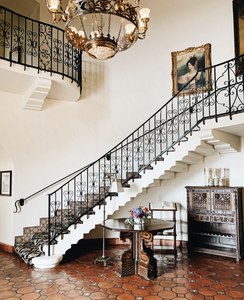 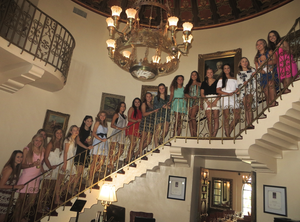 Birthday Celebrations at The Wrigley Mansion

The Wrigley family also owned properties in Chicago, Lake Geneva, Catalina Island, and Pasadena. Ironically, the Wrigley Mansion was the smallest home and the family only planned on spending a couple weeks out of the year here. Sadly, William M. Wrigley Jr. died in Ada's bedroom in 1932, immediately following the completion of the home. Ada then moved into William's room after his passing, starting the alleged haunting rumors.

Following the death of William Wrigley, the home was sold several times. Some owners wanted to tear it down to make room for housing, some wanted to shut the home down entirely. Thankfully, in 1992, Geordie Hormel and his wife purchased the mansion and wanted to share its magic with the community. Today, the mansion offers tours, lunch, dinner, Sunday Brunch, a bar menu along with a happy hour. There is access to the private quarters, that have been newly remolded, for dining.

The main restaurant in The Wrigley Mansion is Geordie's, named after Geordie Hormel. The restaurant offers lunch, dinner, bar bites, happy hour, seasonal afternoon tea, and an extensive wine list with more than 1,200 bottles. Geordie's is usually served buffet style, but due to COVID-19, they now bring the bountiful buffet directly to your table. Due to the amazing food, wine, historic charm, and breathtaking views, Geordie's has been awarded 'Wine Spectator's America's Top 100 Wine Restaurants and Wine Spectator's Best of Award of Excellence.'

The mansion offers more than dinner and drinks. They have partnered with Phoenix Theater Company to provide dinner and show under the stars. Wrigley Mansion is also a desired wedding venue, it can accommodate intimate gatherings of 10, seating for 300 or reception-style events up to 1,500.

Whether you are going to the Mansion for lunch, happy hour, a dinner under the stars, or a wedding, the beautiful Wrigley Mansion will be one to remember.

​Is the Wrigley Mansion Haunted?

It is rumored that The Wrigley Mansion is haunted, William M. Wrigley Jr. died at age 70 in his wife's bedroom right after its completion. The Wrigley family did not spend much time in the winer cottage following his death, they even stated that it felt chilling to be there without him. Many visitors still say to this day that the tour guides will mention, if the visitors are interested, about the supernatural events that the staff have experienced. The flickering of lights, random spots of cold air, strange smells coming from bedrooms, odd happenings, and the chilling feeling visitors have claimed while on the tour.

If you're looking for a historic mansion that offers amazing food & drink, world-renowned views, and the possibility of a ghost sighting, The Wrigley Mansion is the spot for you!