The Mystery Castle is located in Phoenix, Az in the foothills of South Mountain Park. The "castle" was built in the 1930's by Boyce Luther Gulley and dedicated to his daughter, Mary Lou Gulley after being diagnosed with tuberculosis. 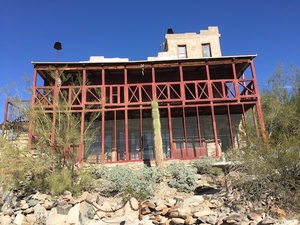 The backside of the Mystery Castle. Photo Credit to MaryLou Driedger

The Promise between father and daughter

Boyce Gulley had often taken his daughter, Mary Lou to Alki Beach, where they went to build sandcastles on the beach. Mary Lou had always cried when the waves washed away the castles. Boyce had always told his daughter that she was his princess and he would one day build her a castle big enough to live in. 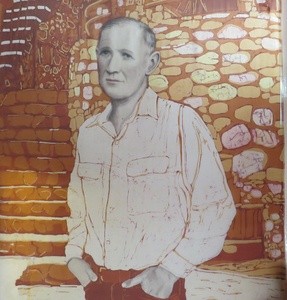 The History of the Mystery Castle:

Mary Lou Gulley was born in in 1923 in Seattle, Washington to a Boyce and Frances Gulley. In 1927, Boyce had abruptly left his wife, Frances and his daughter, Mary Lou; and have refused to tell them where he was going nor when he will return. Over the years, Mary Lou had stayed in contact with her father, but he never revealed his whereabouts. In 1945, Mary Lou and her Mother have received a telegram that he had died in Phoenix. Later, Mary Lou and her mother had received a letter from her father.

In this letter, he had explained that he had left them because he had been diagnosed with tuberculosis and he was told that he only had about six months to live. Afraid that he might infect his family with tuberculosis; and feared that his family will watch him die a slow death; he'd kept the illness a secret and have departed for Arizona, in hope that the climate would ease his suffering.  Also, in this letter is that where Mary Lou had learned that her father had left her a mansion that he'd spent fifteen years of his life building for her.

Mary Lou and her Mother traveled to Phoenix to see this "castle"; Upon seeing the castle, they saw the structure with parapets, balconies and turrets. In seeing the castle, Mary Lou had realized that her father had fulfilled his promise by building her castle to live in.  The castle contains eighteen rooms with thirteen fireplaces along with a chapel and a dungeon.

Mary Lou's father had left instructions that the castle was there to keep on the condition that they have to obey a certain request. In the basement that is called "purgatory", there is a trapdoor that was combined to open until Jan 1st, 1948.

While waiting for the day to open the trapdoor, Mary Lou has discovered other surprises that were left by her father. On one occasion, Mary Lou has found hundreds of coins that poured out of the wall when she had removed a loose stone in a wall. In other spots within the castle, Mary Lou has found necklaces, cash, gold nuggets, gems, and personal notes from her father.

Days, before it was the trapdoor was to be open, Mary Lou's Mother has contacted Life Magazine and has told the editors about the family's castle, and the mysterious trapdoor in the room, purgatory.  A crew was sent out to interview Mary Lou and her Mother and to document the opening of the trapdoor on the day of. With her mother and Life Magazine looking on, Mary Lou opened the trapdoor on Jan 1st, 1948. Mary Lou has descended into the 9ft pit and has found gold, cash, letters from her father, and photograph that was taken days before his death. Carefully going through the items, Mary Lou had found a small piece of paper; it was a Valentine that she had made for her father when she was a little girl. </div> <div> 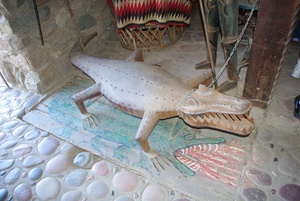 A metal alligator on top of trapdoor Photo Credit: jsemmel

On Jan 26th, 1945, Life Magazine had published their article about the Gulley family with the title: "Life visits a mystery castle: a young girl rules over the strange secrets of a fairy-tale dream house built on the Arizona desert."   With this headline, the name "Mystery Castle" stuck.

After the Life Magazine had published their article, Mary Lou and her mother began offering tours of their castle. People came near and far to see the castle. Mary Lou willing to share the castle's quirks and the stories of it’s past.

Frances Gulley had passed away in 1970 and Mary Lou has continued living in her castle and continues to share stories to anyone that visits. Mary Lou has passed away in 2010 and her dying wish was the castle to remain open to the public.
</div> <div> The Construction of the Mystery Castle

The castle is about 8,000 square feet and it is built on a 40-acre plot of land. The castle has 18 rooms and it's made from items that were found at a local dump or from the local swap meets.  Old glass dishes were used for the windows, the floating staircases are made up of stone, and many of the boulders are recycled that contains the original hieroglyphics from Ancient Native Americans. The interior of the castle contains both a chapel and a tavern. The castle also contains thirteen fireplaces that are spread around the eighteen rooms. Gulley used railroad ties to create steps and the stairways. The unusual pieces of stone became arches. The welded scrapes of metal became a structural use and as well decorative. Besides the mixture of components that are holding the castle together is goat's milk.  The modern conveniences like plumbing and electrical wiring were not added until the 1960's. The décor of the castle is comprised of fragments that are sculpted into something new for each room.  The views that the castle has the views of the desert beauty before the views of downtown Phoenix decorated the skyline. 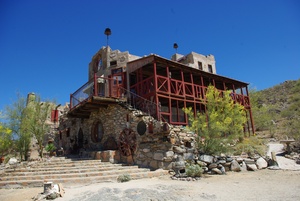 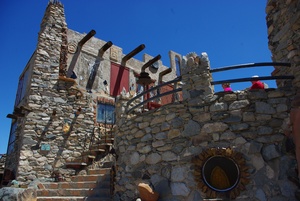 Stones stairs lead to a patio that gives views of South Mountain and the surrounding Phoenix area. 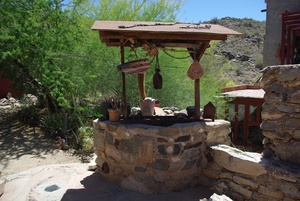 The Mystery Castle is open for regular tours through October through May. Reservations are not needed to take a tour. Tours will last from 30-45 mins.

The Mystery castle has been featured in:

The castle is also listed in the Arizona Historic register and is a pride of Phoenix. 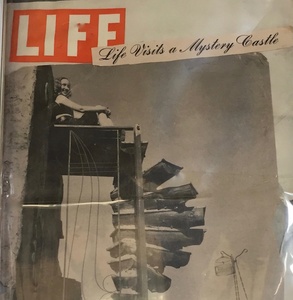 A copy of Life Magazine where they visited The Mystery Castle. Photo Credit: MaryLou Driedger