The Strip District  (known to locals as "The Strip") is a one-half mile long neighborhood alongside the Allegheny River in downtown Pittsburgh, Pennsylvania. The neighborhood rests in between the busy cultural and hill districts and has been a popular tourist and local destination for many years. The Strip features many historic buildings, factories, and attractions, with much of its original architecture still in use. However, In recent years The Strip has become known for its many different markets and ethnic grocery stores, with vendors selling anything from seafood to flowers to fresh fruits. The Strip is known for its restaurants and bars, serving Italian, Polish, Caribbean, Lebanese, Mexican, Vietnamese, Thai, French, and Irish cuisines. The Strip also features many retail stores with clothing boutiques, antique stores, and many sports merchandise stores. The Strip also features art studies and workout studies in many of the newly renovated warehouses. In the past few years, The Strip has become a center for tech companies as well and even growing residential populations. 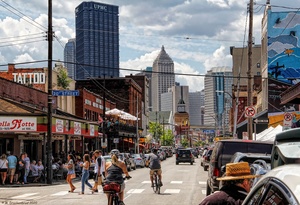 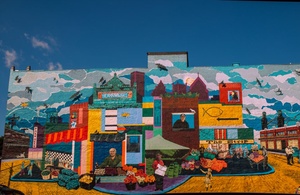 The "Strip Wall Mural" by Carley Parrish and Shannon Pultz, located in the entrance of the district on Penn Avenue. Photo from KarthisKitchenStudio

In 1814 James O’Hara and George Bayard became the property owners of the area between 11th and 15th street in downtown Pittsburgh, Pennsylvania.[1] This area was called “Northern Liberties of Pittsburgh” and by locals “Bayardstown”, eventually becoming “The Strip District”.[2] In 1937 Bayardstown became Pittsburgh’s Fifth Ward.[2]  The Strip District's prime location on the Allegheny River and close proximity shipping lanes and materials made it the perfect location for further industrial development. Eventually The Strip became filled with iron mills and glass factories.[1] After the civil war, Pittsburgh had major industrial growth, with many immigrants moving to the city.Westinghouse, The Heinz Company, ALCOA, The Fort Pitt Foundry, U.S Steel, and Andrew Carnegie got all of their starts in The Strip.[2]

After industry grew in The Strip, it also became a wholesale produce center. In 1906, the train tracks were removed from Liberty Avenue, leading into downtown, which caused the merchants to move towards The Strip District. Going forward into the 20th century, The Strip became the hub of produce sales with markets and grocery store chains popping up across The Strip. Eventually The Strip became less known for industry and more known for its fresh produce, sea food, meat, and poultry.[4]

Going into the 1930s, The Strip went through some struggles when The Great Depression hit and St. Patrick's Day Flood of 1936 hit Pittsburgh as well.[2] When the St. Patrick's Day Flood hit Pittsburgh many people were killed and injured. Many businesses were also destroyed and not able to recover. When The Great Depression hit many people were left unemployed and the wholesale businesses began to struggle.[2] Post war and Post depression, trucks began to be used instead of trains for transportation. Chain stores also began to grow in popularity and local stores were put out of business. Wholesalers began losing business, and instead grocers would buy from growers.[1] Because of this a lot of businesses were forced to leave the area, leaving the warehouses abandoned. 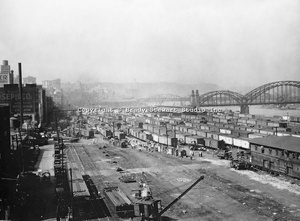 The Strip District in 1925 before construction of produce yards. Photo from The Brady Stewart Collection

The Strip has gone through many changes over the years. Now it is a blend of its historic buildings, produce markets, restaurants serving foods from many different cultures, and everything in between.[3] The Strip attracts everyone from tourists to locals and if you are planning to visit there are many options: 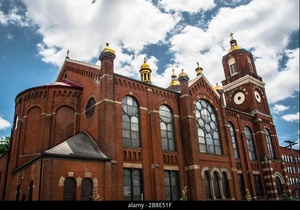 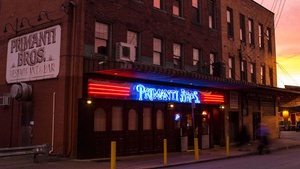 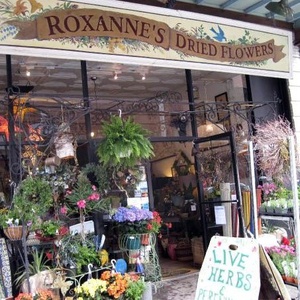 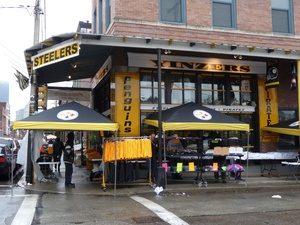 Yinzers in The Burgh is a sportswear store off of Penn Avenue. Photo from Nicole Finney Headley

Cultural Influences on Food in The Strip

Pittsburgh has long been known as a city with multicultural heritage, specifically in its downtown neighborhoods. The most common groups are German,Italian, Hispanic, Polish, Austrian, Belgian, Czech, Slovak, Greek, Slovenian, Lithuanian, Jewish, and Irish.[7]  A Lot of these cultural influences can be traced back to food. While The Strip has many attractions, its main attractions all feature food. Being a “foodie” city, there are multiple foods and restaurants that are known specifically for being a part of pittsburgh. On the Strip District, the first ever Primanti Brothers restaurant was opened.[3] This restaurant has Italian influences and has become such a large part of Pittsburgh life, that the restaurants are on every corner and in every single sports stadium. The next major food found on the strip is pierogis. Pierogis can be found everywhere in Pittsburgh.[7] In fact, Pierogies are so popular that people dress up in pierogi costumes and race down the streets in them. S & P Polish Deli is a small mom and pop polish restaurant and market, which makes their own fresh pierogies.[3]The next major restaurant with cultural influences is Kaya. Most of the restaurants along the strip are European influences, but Kaya features foods from the Caribbean islands.[3] Not only does Kaya have amazing Carribean food they also have one of the most popular block parties on The Strip. Every May the block is shut down for 8 hours of music, food, and dance influenced by Caribbean culture.

The Strip District Terminal building originally functioned as the center of The Strip's wholesale produce industry.[6] The massive 5 block long building sitting on the edge of the Allegheny river was abandoned for many years up until recently.[6] Now it is one of Pittsburgh's trendiest new spots. The original 1929 building now features Breweries, garden shops, nail shops, pharmacies, yoga/boxing/fitness studios, clothing stores, restaurants, book stores, and even more.[5] While the original architecture of the market has been left unchanged, the space has been painted by local artists and expanded with seating to make it into a public communal space.[5] The Terminal commonly hosts major events from massive group yoga classes to food festivals to engage to community and tourists.

While The Terminal building has now been revived, the warehouses directly across the street still lay vacant. Many warehouses in The Strip are abandoned but this wasn't always the case. In fact, in the 1970s to early 2000s many of the abandoned warehouses functioned as “underground nightclubs”, like the ones across the street from the Terminal. Nightlife used to be an integral part of The Strip and The Terminal. However, in recent years this has drastically declined.

The Terminal in the evening. Photo from McCaffery

3 A guide to Pittsburgh: Strip District blends best of old and newhttps://triblive.com/lifestyles/more-lifestyles/a-guide-to-pittsburgh-strip-district-blends-best-of-old-and-new/