What do you know about Marvel Ice Cream? 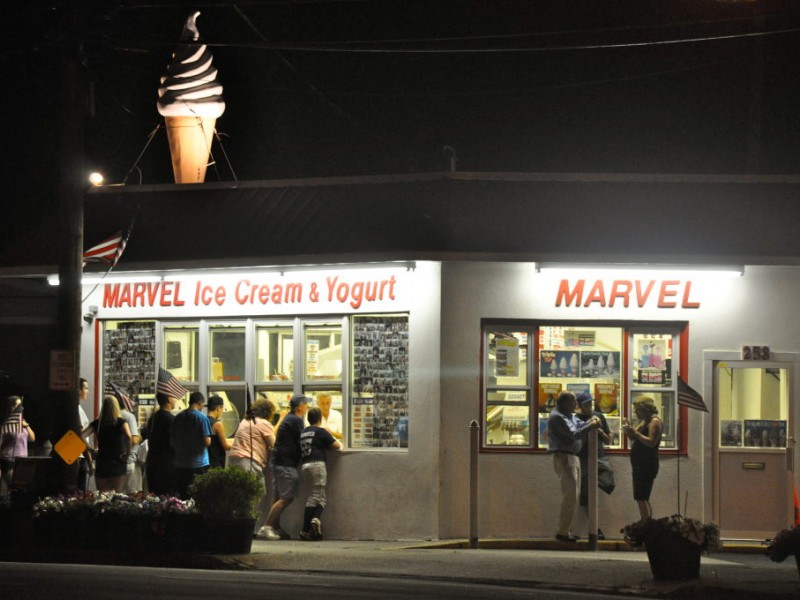 Marvel is the iconic window serve ice cream shop in the town of Lido Beach in Long Island, New York.

Marvel is located in Lido Beach at 258 Lido Boulevard. The soft serve ice cream and frozen yogurt has become a part of a Long Beach stable for more than 50 years. They have a variety of toppings and flavors. Some of the most iconic flavors are pistachio, coffee, banana and peanut butter. Marvel is nostalgic- so many years stoppinghere on hot summer days at Long Beach, Malibu or Point Lookout! The ice cream shop has no indoor or outdoor seating. The most common place customers eat their ice cream is in the front seat of their cars with the windows down and music blasting. The parking lot usually looks like a tailgate with the amount of people in the parking lot and the infectious feel good energy.

One of my favorite parts about Marvel, is the exterior of the building. Each year, the owners capture photos of all of the smiling faces that are enjoying their favorite summer time snack. By the end of the summer, the frequent Marvel go-ers and local community members become part of Marvel for the season. Each spring season, the windows are bare and are waiting to be filled with new summer time memories and cones. As a kid, A goal of mine was to get a photo on the wall of Marvel, each and every summer. 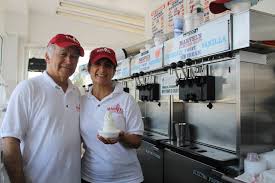 The Papgeorge family opened the shop in 1951, in its original location. The Papageorge family gave the business it's name Marvel because it means "top of the line."

Arthur Katsafouros, 68, a resident in the local community bought Marvel from the Papageorge family .The owner works in the shop from sun up to sun down. He is the face of the company as well as the owner. The owner stands by his product. The outside of the building is filled with photos of happy customers, smiling faces and sprinkled covered cones. 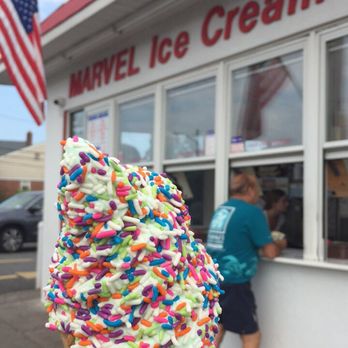 Marvel's claim to fame is the classic vanilla soft serve dipped in chocolate topping that instantly hardens into a shell exterior. A personal favorite is the chocolate vanilla twist frozen yogurt with the marvel mix topping. Essentially it is the everything bagel topping to ice cream, a mix of rainbow and chocolate sprinkles with chocolate cookie crumble.

The selection is split half and half between frozen yogurt and soft serve. The flavor list is : vanilla, chocolate, strawberry, pistachio, coffee and peanut butter.

"Another thing new people get confused by is how absolutely excited you were to take them to a place that basically just fires a seemingly unremarkable chocolate and vanilla soft serve swirl into a conversation, and rolls it in some simple crunches. But Marvel isn't for ice cream fanatics who only frequent artisanal establishments that hand milk their cows behind the store. It is for the people who went to the south shore Long Island beach when they were 8 years old, ended a long day of getting thrashed in the waves absolutely starving, had a parent with a. few bucks in their pocket and walked past Marvel. Even 10, 20, or 50 years later, it's still the best ice cream those people have ever eaten." - Ben Robinson, Editorial Director of Thrillist Food and Travel.