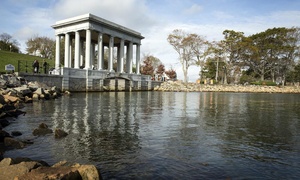 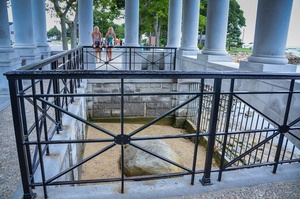 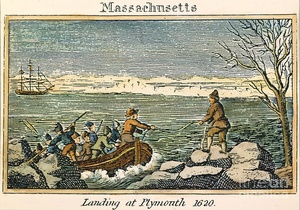 Plymouth Colony was founded in 1620 by Governor William Bradford and the Mayflower Pilgrims. Plymouth Rock is the believed landing spot for the Pilgrims. While being founded in 1620, the first recorded writing about the rock was not until the year 1715. In 1741, Pilgrim, Elder Thomas Faunce labeled the "Great Rock" as the official landing spot for the Mayflower. With an attempt to transport the rock from its original location to the Plymouth Town Square in 1774, the rock split in half, now revealing a large crack. Multiple primary sources do not mention the Plymouth Rock as the actual landing spot, but that the true welcoming spot would be Provincetown, Cape Cod. With this discovery, the Pilgrim Monument would then be created in Provincetown, instead of Plymouth, 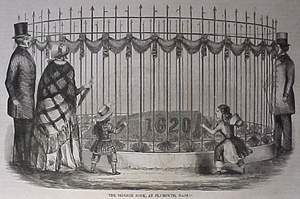 Plymouth Rock is viewed as a symbol for many early settlers as it is said to represent both the virtues, and the flaws of the pilgrims.

"We have come to this Rock, to record here our homage for our Pilgrim Fathers; our sympathy in their sufferings; our gratitude for their labours; our admiration of their virtues; our veneration for their piety; and our attachment to those principles of civil and religious liberty, which they encountered the dangers of the ocean, the storms of heaven, the violence of savages, disease, exile, and famine, to enjoy and establish. – And we would leave here, also, for the generations which are rising up rapidly to fill our places, some proof, that we have endeavored to transmit the great inheritance unimpaired; that in our estimate of public principles, and private virtue; in our veneration of religion and piety; in our devotion to civil and religious liberty; in our regard to whatever advances human knowledge, or improves human happiness, we are not altogether unworthy of our origin…"

The rock is also said to symbolize the many localized wars. (King Philip's War 1675-1678) which would be labeled as the first Indian War. In the past, the rock was buried by Indian Rights Activists in both 1970, and in 1995 as part of the National Day of Mourning boycott. These boycotts present many debates over the traditions and values celebrated by this monument. 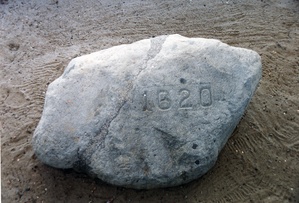 Geologically classified as both Dedham Granite and Glacial erratic, the rock was said to once weigh nearly 20,000 pounds, but due to erosion, only about one -third of the rock remains. Due to erosion over the years, the rock now gives an underwhelming first appearance because of it's small size. 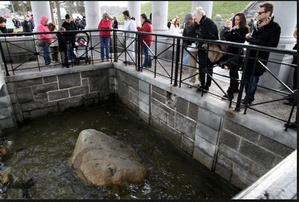 Despite debates over Plymouth Rock's true value and history, it remains as one of South Shore Massachusetts' largest tourist attractions. The rich history of the area attracts tourists from thousands of miles away.