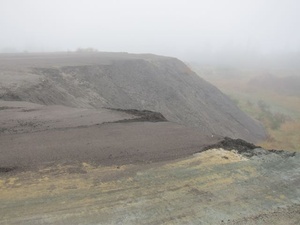 PTPC’s landfill covers about 25 acres of their southern tract of land.  It is about 40 years old at this point (2012) and the mill estimates that it has  50 years of life left at the current rate of disposal, or 30 years if the Biomass Cogeneration Project (BCP) proceeds.

The mill bought this site partly because it had a large clay deposit.  A lot of the clay was dug out and used to line the mill’s water treatment ponds.  The hole that was left was largely impermeable, consisting of clay and glacial till, making it a good choice to site the mill’s landfill.

An estimated 7000 dry tons of boiler ash is currently deposited in this spot annually, in addition to the lime grits generated in the kraft chemical recovery process.   The combination is very alkaline, with a pH of 12 or more.  If the BCP proceeds as planned, the amount of ash deposited each year will roughly double.​

The landfill reports published by the Department of Ecology annually list the following figures for disposed material at PTPC (converted to dry tons/day):

While the landfill is currently classified as an “inert landfill” for regulatory purposes,  it is the only active ash landfill in Washington state to be classified that way.  There is currently pressure on the Jefferson County Health Department to change that classification back to “limited purpose landfill” (LPL), as it used to be from 1990 until 2004.   Such a change would trigger annual groundwater monitoring requirements, as well as requiring “financial assurance” that the mill will be able to safely decommission the landfill when the time comes.  It also requires the installation of an impermeable liner, a requirement for which the mill had a variance during the years that it was designated an LPL.  The argument is that between the clay and the glacial till, the site is naturally lined, and also that our annual rainfall is relatively low.

The main concerns behind the pressure to reclassify are the pH of the landfill contents (the pH of groundwater should not exceed 8.5) and the related question of barium.  There are low levels of barium in soil naturally, and the levels in ash are a few times higher.  Normally this barium is present in stable insoluble compounds, but at pH higher than 10 those bonds are more easily broken and the barium can leach out.  Soluble barium compounds are quite poisonous.  The groundwater under the landfill was last tested in 2004 and barium levels were, at their highest, 245 micrograms per liter.  The state’s groundwater quality standard  is 1000 micrograms per liter.

The mill’s position is that last time groundwater was checked (2004) leached chemicals were not a problem, and since nothing has changed since then the landfill should be able to continue its “inert” status.  But one thing that has changed is that DOE is becoming increasingly concerned with highly alkaline waste.  Another is that there is a proposal on the table (BCP) that would roughly double the rate at which ash is deposited at the site.

One option being discussed by regulatory agencies is to continue the "inert" status but require annual monitoring of groundwater as well as financial assurance.  This might at least let us know if leaching of chemicals did start to become a problem.  The mill has said that it would cooperate with a requirement for annual monitoring of groundwater.

Of further issue, however, is just what is meant by "monitoring of groundwater".  Landfills classified as LPL have a requirement to monitor groundwater from four separate wells in the vicinity of the landfill.  In 1998, while the PTPC landfill was classified LPL, there were four wells drilled.  However three of those wells were dry and the fourth produced only a small flow of water.  It is from this fourth well that all monitoring data has been produced, and there is some question whether this is really adequate.