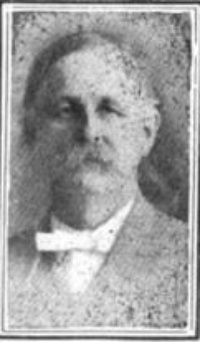 Clay Sloan as Commissioner of Mines, Manufacturing, and Agriculture, 1913
(Source: Biennial Report of the Secretary of State; https://tinyurl.com/uodssw3

Clay Sloan was born August 20, 1861. When he was 12 years of age, he became the financial head of his family after his father, James F. Sloan, died. He supported his mother and two younger brothers. It was said that all his father left was a small patch of land and a country store. At the age of twenty, he graduated from Arkansas College. He entered the legislature as a representative in 1891. He was then elected to the state senate, became president of the senate, served as acting governor and after four years in the senate, he was elected state auditor for four years. After leaving politics, he devoted his time to farming and stock raising.

His son was Eugene Sloan (born September 1892), who attended school at Powhatan and entered Arkansas College. Eugene graduated in 1912 then attended Vanderbilt University in Nashville. He worked as an attorney in Jonesboro with his cousin Horace Sloan.

Above taken from Centennial History of Arkansas Volume 3.

Clay Sloan was the circuit court clerk in 1889 and 1889. He was born August 20, 1861. He was educated at Arkansas College in Batesville. He taught at Powhatan until 1886. He was also county examiner from 1884-1886. He is a Democrat in politics. He was married Katie Matthews (daughter of Benjamin F. Matthews) in October 1888. He is a member of the Old School Presbyterian Church.

From Mother of Counties

Sloan was a prohibitionist and spoke publicly in support of statewide prohibition.1

Sloan was a staunch opponent of Governor Jeff Davis in the election of 1904 and supported Judge Carroll D. Wood, leading the local Woods Club.2

On February 20, 1899, Sloan was called to testify in Circuit Court in Powhatan. He had witnessed a fight between Black Rock City Marshal John F. Jones, and a local, George Imboden.3

Sloan was one of several Powhatan politicians who were elected as part of the Agricultural Wheel ticket in 1886.4

As a result of this fire, Sloan's face and eye were damaged and he was forced to take a leave of absence from his duties. Clay_Sloan_suffers_burn_in_house_fire__1_6_1900.pdf