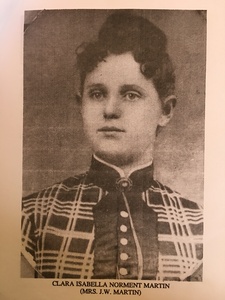 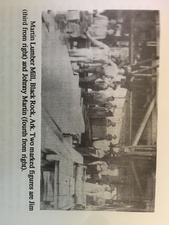 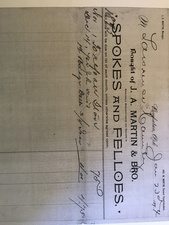 Copy of stationary from the Martin company.
(Powhatan SP archive)

John Martin was born on June 16, 1860, in Louisiana. He was the son of Felix G. Martin and Susan Elizabeth Doyle. In his own words, “the writer seems to have come into the world under some disadvantages, the first of which was the absence of a mother’s love and care…” which suggests his mother died in childbirth.[1] When he was eight, the family moved to Powhatan, Arkansas, and there his father made wagons. John attended the “subscription schools” until he was seventeen, then transferred to Smithville. His education was cut short when his father called him to work in the wagon shop.

In 1881, Felix Martin decided to move back to his old home in Bowling Green, Missouri. John had seven dollars to his name, and with his brother, J.A. Martin, took over the business, renamed as JA Martin & Bros. They owed their father several hundred dollars for the rest of the company’s assets. The Martins tried their best to be productive, but without machinery they couldn't keep up with demand. They installed a boiler, engine, and a band saw, the first of its kind anywhere in the state. This allowed them to make over 3000 pieces a day. They eventually transitioned out of the wagon-making business entirely and for a while only made wagon spokes, but soon they expanded once again and made plow beams, tongues, bolsters, and reachers. According to Martin, “there were only a few factories of this kind in the country.”[2]

By 1900, the brothers were shipping forty-five rail cars of merchandise every month. A steamer, F.W. Tucker, made weekly trips to bring them raw materials.[3] With their balances good, the company was able to provide small loans, but most of them were made against tracts of land in Lauratown. They eventually bought some of these lands outright.

John married his wife, Clara Isabelle Norment, in 1894, and had one daughter: the famous hook-rug artist Helen Martin King. He moved to Batesville, Arkansas in 1904 and lived there till he died at the age of seventy-nine.[4]

[1] Martin, John W. “The Life and Biography of J.W. Martin.” Lawrence County Historical Quarterly. Vol.13 No.3. 1990. (Author’s note: The cited document is alleged to have been written by Martin himself, but the editors of the Quarterly had doubts. The text changes tone halfway through, and the writer switches to referring to himself in third person. Additional verification of events as recorded here is needed.)

[3] Shiras, Tom. “North Arkansas Industries.” (Author’s note: this document is from the Powhatan SP archives and is incomplete. A full citation is unavailable. Tom Shiras was a newspaper man who died in 1947.)