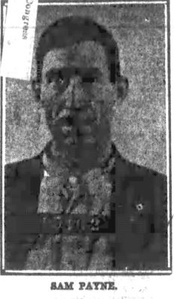 Sam Payne was the son of Richard P. and Vina M. Payne. He had two brothers and four sisters. Nothing is known about his early life, except that sixth grade was the end of his education. In 1904 he married Mandy Dunlap.1

Payne was elected town marshal of Black Rock in April 1912..2 Acting in this capacity, he shot and killed an African-American named Gus Brown, for which he was never punished. Thus began a cycle of violence that would continue for much of his life. In 1913, he was arrested for attacking Marvin Angle for allegedly cheating him at cards. He was convicted of assault and sentenced to three years in the state penitentiary, but Governor George Hays pardoned him after twenty-one months.

In 1917, Payne shot and killed Dan Tolson, claiming he was a bootlegger and violating a new state stock law.3 For this murder, he was sentenced to life in prison. He served his time at Camp 2 of the infamous Tucker Farm in Jefferson County. Three weeks after returning behind bars, he was made a trusty, and killed a fellow inmate who was trying to escape. The prison superintendent, J.T. Burkett, rewarded him by making him “day yardman.” In May 1919, he killed yet another inmate, David B. Smith, and was given a life sentence on top of the fifteen years he had yet to serve for killing Tolson.4

Convinced that the prison authorities “had it out for him,” Payne escaped Tucker Farm and fled to Canada. For unknown reasons, he returned to Little Rock and surrendered to Governor Thomas McRae in June 1921. Three months later, another inmate, Tom Slaughter, tried to escape. Payne thwarted his attempt, but not before Slaughter managed to kill another inmate, Bliss Adkisson.5 Prison authorities lauded him for this, and Governor McRae commuted his sentence to twenty-one years, and then gave him indefinite furlough on December 16, 1924.

But the cycle of violence only continued. Payne returned to Black Rock. In 1926, he fired shots at O.S. Davis. Governor Thomas Terrell revoked his parole and sent him back to prison, yet Payne was furloughed again the next year. In January 1928, Fred Brandon, another Black Rock resident, was found dead. Payne was quickly arrested and charged with murder, since it was common knowledge that the two men had quarreled openly. Payne vehemently denied this, but he was convicted anyway, and the conviction was upheld by the Arkansas Supreme Court. He was paroled for the murder in 1933.

In spite of his dubious reputation, he was elected marshal of Black Rock again in 1935, and he managed to live the last thirty years of his life outside of prison.

5This man was a Jehovah’s Witness from Cleburne County who, along with his father and brother, were sentenced to prison on a slew of charges that stemmed from their refusal to report to the draft board in WWI.--< http://www.encyclopediaofarkansas.net/encyclopedia/entry-detail.aspx?entryID=3694>