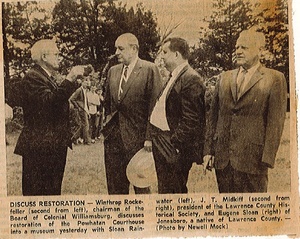 Rockefeller visiting Powhatan, April 26, 1966. They appear to be standing just in front of the courthouse steps, near the present-day flagpole,

Winthrop Rockefeller (May 1, 1912–February 22, 1973) was the thirty-seventh governor of Arkansas, serving from 1967-1971. He played a major role in garnering support for the preservation and restoration of Arkansas’ cultural and historical resources, including Powhatan.

Background– “Physical Evidence of the Past”

Prior to the 1960s, preserving historic sites was not a public policy issue. Places cultural and historical value could be and were maintained by private organizations, such as the Mount Vernon Ladies’ Association. But this only happened in cases of national significance, not local. The only federal laws in effect at that time were the Antiquities Act of 1906, the Historic Sites Act of 1935. The National Parks Service was established in 1916, but it would be many years before all the states had their own parks department (Arkansas’ first park, Petit Jean, didn’t open until 1923).

After World War II, America experienced an economic boom, spurred by the increasing population as well as growing automobile production. President Eisenhower’s Federal Highway Act of 1956 and President Kennedy’s Urban Renewal Program led to widespread destruction of historic communities, especially in downtown areas. The people’s outrage was felt in Washington, where Claudia Alta “Lady Bird” Johnson (wife of President Lyndon Johnson), took it upon herself to investigate and found that the current trend was “destroying the physical evidence of the past.”[1] The resulting report, With Heritage So Rich, sparked national interest, and led to the signing of the National Preservation Act of 1966.

Winthrop Rockefeller was the great-grandson of oil tycoon John D. Rockefeller. By all accounts, he was a maverick of the family who didn’t conform with their established image. Often pushed aside, he enjoyed  a great deal of autonomy. He moved to Arkansas in 1953 where, two years later, he was appointed chairman of the Arkansas Industrial Development Commission (AIDC) by incumbent governor Orval Faubus. He found a state that was crippled by “…tremendous poverty…a poor education system. Even our death rates were higher than the national average, our medical system was not good. So, there was a tremendous amount of catching up to do when Rockefeller came on the scene…Arkansas had basically been a poor deprived state for a long time. We’d gotten used to being at the bottom of every index. We came to believe, all too often, that ‘Well, if it was good enough for my parents it’s good enough for me.”[2]

Aside from his official duties, Rockefeller was an active philanthropist. He donated money to schools, financed medical centers in poor communities, and other acts of kindness that endeared him to the people. Beginning in 1960, he worked to strengthen the Republican Party in Arkansas, which eventually culminated in his triumph in the Election of 1966, becoming the first Republican governor of Arkansas since Elisha Baxter in 1872. In his inaugural address, he said that his victory was “…an expression by the people, that instead of looking backwards we are looking forwards.”[3]  The new administration immediately set about enacting sweeping changes, including prison reform, a minimum wage law, and a crusade against illegal gambling in Hot Springs.

Powhatan had once been the sole seat of Lawrence County, beginning in 1869. In 1887, the state legislature passed Act 84, which divided the county into two districts. By 1963, with the town in decline, the people of Lawrence County voted to consolidate all government functions to Walnut Ridge. Powhatan’s courthouse was abandoned and fell into disrepair.

There are few surviving records that deal with Rockefeller’s historic preservation efforts, as they were greatly outshone by his other reforms, especially deconstructing Faubus’ legacy of segregation. However, the records which do survive indicate large-scale effort to protect Arkansas’ heritage, an effort that began months ahead of his election and continued throughout his tenure.

In a memo dated August 22, 1966, Willard A. “Lefty” Hawkins (director of the state’s Selective Service branch) wrote: “I’ve been asked to get information for you on some of the historical restorations now in progress in Arkansas, with particular emphasis on the old court house at Powhatan…According to Dr. Ferguson…there is no particular historical significance about the courthouse as such, although the architecture may have some appeal. One remarkable thing about it is the fact that it houses records which are continuous and unbroken since 1815–a total of 141 years. It follows that some historical data, significant to the state’s history, could be gleaned from these records.”[4]

While serving as governor, Rockefeller was also the chairman of the board of directors at Colonial Williamsburg (which was, itself, a Rockefeller family creation). Drawing from their expertise, he assembled a twelve-man panel to lead preservation efforts: The State Review Committee.

On September 10, 1970, a memo from Fred Petrucelli’s office celebrated the fact that the Powhatan Courthouse was one of thirteen sites in Arkansas which had been added to the National Register of Historic Places. The memo also reveals that Rockefeller funded the initial survey himself.[5] But more money came. In March 1972, the National Parks Service awarded the Arkansas Department of Parks and Tourism more than $10,000 specifically for restoring the courthouse. Later that year, in September, another $120,000 was awarded by the Economic Development Administration. Lawrence County residents contributed another $30,000.[6][7]

Rockefeller died in 1971 and did not get to see the restoration of the courthouse finished. Although a group of concerned residents–the Powhatan Restoration Committee–had taken steps to preserve the courthouse and other structures, it is unlikely that without the governor’s money and connections the site would have received the expert attention it needed at that time.

For further reading on Albert Kendrew's efforts to rally support, consult these sources: