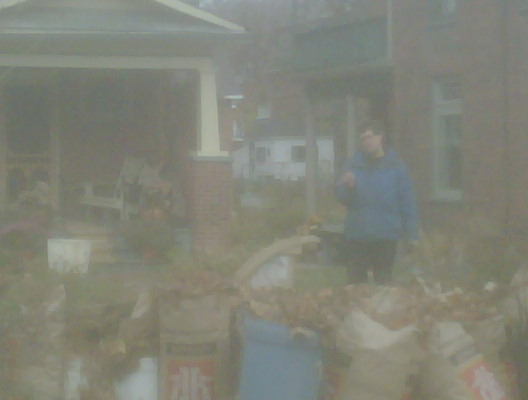 "Ginko Inc." seems to offer services spanning "Personal Therapy, Landscaping and Business Services" according to their website. Signs in people's yards in The Avenues and the Old West End state that they do "Organic Gardening" and I have seen Paul working on people's interlocking walkways and driveways.

In 2012, Paul seems to have taken on hair care as referenced at https://twitter.com/clubsizepaul and http://www.shirlz.com/peterborough/ginko-peterborough-c17761741.htm and his http://ginko.me/ website seems dead, but this Google pages are up, though perhaps out of date: https://sites.google.com/site/ginkopeterborough/ . The Yellow Pages website lists one "Ginko" in Peterborough: http://canada411.yellowpages.ca/search/?stype=si&showDD=true&what=ginko&where=Peterborough%2C+ON&x=20&y=18

2011-06-29 22:38:32   (updated 2017-11-05 after Paul asked me to remove speculation about his history) Paul seems to be a nice enough fellow, but we had difficulty with his work when we asked him to repair some unevenness on our interlock brick driveway. Communication was a challenge as he was often unable to answer direct questions or communicate his plans or the expected outcome of his labours. In the end his work was not what we wanted (the "repaired" section ended up being about 5 cm higher than the original section) and we will have to get someone else to come and fix his "fix". While we were unhappy with the outcome of the driveway, the challenge was that he was seemingly unable to understand our desires, unable to articulate what he could do to address our problem, unable to explain why things were done in particular ways, and unable to fix or even attempt to fix the work that he did. I am very suprised that the Paul Archer we interacted with would have been able to complete a BA in Communications from SFU as indicated on his website - our spoken and written communications have been anything but clear. He struggled with completing spoken full sentences, and some of his written messages read more like abstract poetry rather than utilitarian prose. I have seen other brickwork that he has done in the area (though not spoken to the owners) and at least some of the examples are reasonably well put together, but with the communication difficulties we have had, I would suggest that future possible clients be careful to insure that they and Paul both understand the scope of any work that they want done. —j-beda

2011-09-18 16:31:28   Now 593 Chamberlain on Wednesday meeting at the main set gallery to start organizing provincial money for ordormance spaces so seeking people who need a space [email protected] or drop by

2011-09-18 16:35:59   Bette work done by ginko 303 fredrick and 593 Weller facts being took time to do good work remember customer on gilmour said to home depot tool rental sales glad I was with him. Gilmour repair rewired knowledge of adding metal retainers as was not originally thre and to date I sponsored the helping student plus have her a bike. Mt marketing gilmour garage sale got the work.