Witnesses have reported hearing strange noises and footsteps, as well as seeing flickering lights attributed to an old priest who died at Ambrose Hall.

A benevolent female entity dressed in a red or blue dressed is said to roam the halls of the hotel.  A musician is also said to play piano music in the ballroom, which can be heard despite an otherwise empty room.

Also known as the Vickie Ann Palmer Building, this area is the site of numerous paranormal activity.  It's said that disembodied voices will call out your name, furniture will move on its own, and visitors can't shake the feeling of being watched.

A section was made in this cemetery for the child victims of the fire at Iowa Soldiers Orphan's Home.  If you stand by this section on Halloween night, you can hear the screams of the orphans.

According to local legend, prisoners were hung in the prison's bell tower.  Some claim to have seen a hanging body in the first window of the bell tower at night. 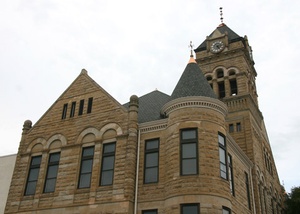 The statue sat at the Deere tomb in Riverside Cemetery, and was rumored to have been struck by lightning, turning it black.  Brave residents would touch the angel at midnight, but the unfortunate among them would not escape without a price.  Stories started of a man dying of a heart attack after touching the angel, and a woman who was found unconscious by the angel with her hair turned white permeated the QC.  Due to frequent vandalism, the Deere family removed the angel, which now resides in an Arizona wellness clinic.

It's said that not only did an unwed mother throw her newborn into Cedar Creek, but also that a school bus full of children crashed into the waters, with no survivors.  Since these tragic incidents, reports have been made that if you stop in the middle of the bridge and put your car in neutral, an invisible force will slowly push you safely across the bridge.  Some even claim to see tiny hand prints on their car windows. 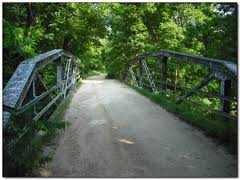 Many students who live in Andreen Hall are all-too-aware of Chauncey Morton, the ghost of a deceased student who was accidentally shot in Andreen on Oct. 24, 1958. Students have often heard unexplained noises and moving furniture throughout the dormitory. Especially at night, unexplained lights turning on and off as well as doors closing on their own can be found on every floor of the building.