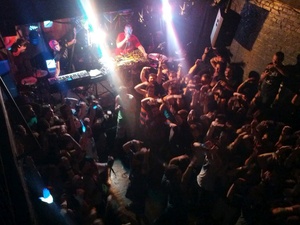 Dan Deacon plays to a capacity crowd at The Pour HouseThe Hopscotch Music Festival takes place in Downtown Raleigh in early September. 2012 marked the festival's third year. Fifteen venues played host to over 175 bands on September 6th, 7th and 8th. Hopscotch can be a bit confusing to newcomers, but with a bit of planning, you'll get the most out of the event.

Important note: Most Hopscotch day parties - events organized by artists and labels and local groups - are 100% free. See below for more information about day parties.

Tickets for Hopscotch generally go on sale in December. Tickets are offered in various tiers:

The Hopscotch lineup - the actual bands playing the shows - is typically announced in April. You'll notice that this is well after the tickets have gone on sale. In some ways, Hopscotch is a leap of faith -- faith in the musical tastes of Grayson Currin, the event's musical organizer. Past years have brought together a good mix of local, regional and national acts. It's possible (even likely) that there will be many, many bands at Hopscotch that you've never heard of, though this isn't something to fear. The best plan of attack is to do you homework.

The key to a good Hopscotch experience is doing a little bit of homework. If you're planning on attending Hopscotch, it's probably because you love music, so this kind of homework isn't really work at all.

Abby (with the help of a couple friends) also put together a great Google Calendar of the full Hopscotch 2012 schedule, including day parties. Before you head out, sit down with the printable Hopscotch schedule and the Google Calendar and come up with your own personalized plan for the festival.

Many of the downtown parking decks are free between 7pm and 7am. Even if you park before 7pm, parking is free if you leave after 7. Notable exceptions are the one next to the police station on Cabarrus Street near Deep South and the decks near the Raleigh Convention Center. Pick a parking deck near the last venue you plan to visit that evening and you'll ensure a short walk after a long day.

During the day, Hopscotch venues (plus a few non-venue locations) will open their doors for FREE shows. These shows are a great way to see some of the bands that will perform in an official capacity at clubs during the festival. Day parties often bring together interesting combinations of artists that don't usually perform together. Some parties will be held outdoors on closed-to-traffic streets. Keep an eye on Twitter or the Hopscotch site for updated info about these parties.

During the Plaza shows, there will be lots of options for quick eats from street vendors or one of the restaurants located in the City Plaza. Popular spots like Beasley's Chicken & Honey can fill up fast. Pick a spot slightly out of the downtown grid for a less-crowded experience. Newcomer Calavera and old-favorite Dos Taquitos Centro are good bets.

Some of you may appreciate a bit of a break during the evening. A chance to recharge. I heartily recommend planning a mid-evening stop at a venue with seats. Fletcher Theater was a great venue this year that combined good music with comfy seats.

It's entirely likely that one of the acts that you planned to see will be "sold out" - the venue will be too full to allow anyone else to enter. If you did you homework, you probably have a couple of other backup bands that you'd like to see. If you don't, be adventurous and discover something new.

One Option: Pick a Venue and Stick With It: Hopscotch organizers do a good job of curating the music that can be heard in a given venue. There's usually a good flow from band to band as the evening progresses. If you see one band that you like on the lineup for a venue, it's a safe bet to stick with that venue all night.