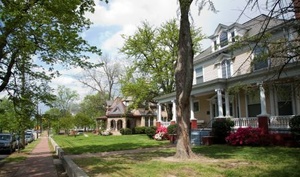 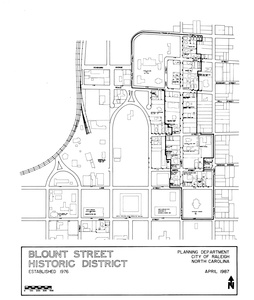 Population growth after the Civil War prompted residential development along Blount Street and surrounding streets above the northern city limit, marked by North Street at the time. While some antebellum houses remain, like the 1855 Greek Revival Lewis-Smith House at 515 North Blount Street, the once-rural area emerged as the city's finest neighborhood around the 1880s. Large and handsome dwellings reflect the variety of architectural styles popular in the Victorian period, including Queen Anne (the 1882 Hawkins-Hartness House at 310 North Blount Street), Second Empire (the 1870 Heck-Andrews House at 309 North Blount Street), and Italianate (the 1875 Merrimon House at 500 North Blount Street). The 1891 Queen Anne-style Executive Mansion stands at the center of what had been one of the five park squares in Raleigh's original town plan; the block is bounded by North Blount, Jones, Person, and North Streets. Blount Street houses that stand north of Peace Street are from a slightly later period of development and tend toward the late Queen Anne or Colonial Revival styles; the smaller bungalow house type appears along that stretch. Peace College, founded in 1858 as Peace Institute, is also in the district.

Just before the Civil War this area was semi-rural, dotted with a few large villas and the developing campus of Peace Institute. Between 1860 and 1870, Raleigh's population grew by sixty-three percent. Residential development moved north from the intersection of North Blount and North Streets and the pastoral area became more suburban in nature. The first substantial house built in Raleigh after the Civil War was the impressive Second Empire Heck-Andrews House at 309 North Blount Street. The house, which featured a three-story tower and a dramatic mansard roof, set the tone for construction on what quickly became a fashionable street with houses built by industrialists, railroad executives, and planters.

North Blount Street's reputation as Raleigh's finest neighborhood solidified in 1883 when the state decided to build the Executive Mansion on Blount Street. Convicts from the state penitentiary built the house using bricks they formed by hand. The brick sidewalks surrounding the Executive Mansion were also hand-fashioned by convicts; some inscribed the bricks with their names. The mansion, under construction for several years, finally stood complete in 1891.

Residential building continued in the neighborhood, particularly after the turn of the century through the 1920s. Newer suburban developments, like Hayes Barton, Boylan Heights, and Cameron Park, proved more popular and construction in the Blount Street area slowed. Throughout the middle decades of the twentieth century, original owners of some of the larger houses moved out or passed away and new owners subdivided the dwellings into apartments. In 1969, the State Property Office began acquiring houses for use as state offices. The state also moved several houses on North Wilmington Street to North Blount Street to accommodate the new government mall under construction in the 1970s. Soon, the state will move all state offices out of the Blount Street houses and the area will be redeveloped, restoring its residential nature.