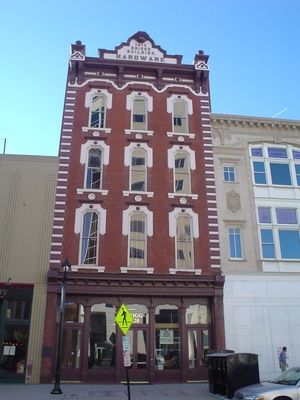 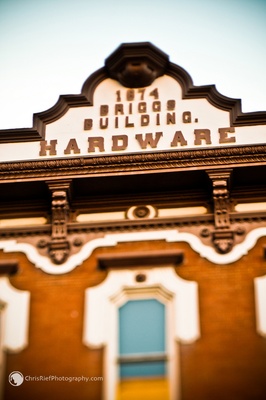 The Briggs Hardware Building is an excellent example of the lively taste of the mid- to late-19th century, the contrast of red brick with light accents was a favorite of the high Victorian Gothic style. The hoods and drip molds over the windows are medieval in style, while the tall, bracketed cornice shows the influence of the Italianate. Thanks to the Briggs family, who ran a hardware business here until 1995, the building looks today much as it did when it was built.

The red brick Briggs Hardware Building is the only late nineteenth-century commercial downtown building to survive essentially unchanged since its construction. It was Raleigh's first skyscraper, and at one time the tallest building from Raleigh to the coast. The building's first floor houses Raleigh City Museum; its upper floors were converted into offices in the late 1990s.

History
Thomas H. Briggs, in partnership with James Dodd, opened his eponymous hardware store in 1865 in a smaller building located at the present site. Briggs, a successful Raleigh businessman whose ventures included real estate and general contracting, was an important player in Raleigh's Reconstruction-era period of expansion, when "Handsome stores and dwellings rose rapidly, and enterprise was manifested in many  ways." Family tradition has it that Briggs financed his enterprise with gold and silver coins he had buried in lead pipes during the Civil War. Whatever his money source, Briggs' business flourished, selling a wide variety of merchandise from soap to guns, prompting the erection of a new building in 1872. Upon its completion two years later, the building was heralded for its height and fashionable design. Shortly afterwards, James Dodd retired and Briggs formed a partnership with his two sons, James and Thomas  H. Jr..

The Briggs building is a familiar landmark for people who grew up in Raleigh who recall chatting while shopping for wrenches or running to the back of the store to inspect the newest shipment of toys. The building's upper floors have also witnessed an array of activity. Upper level tenants have include the city's first Y.M.C.A., the Raleigh Little Theatre, the State Museum (predecessor of the N.C. Museum of Natural Sciences), and even an armory! Current tenants include the Raleigh City Museum, Preservation North Carolina, and the Raleigh Urban Design Center ( A division of Raleigh's Planning and Development Department).