Capital Boulevard is a major thoroughfare connecting downtown Raleigh to its northeast suburbs. 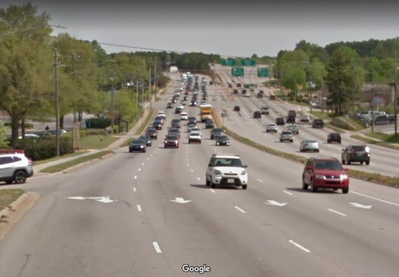 Capital Boulevard, as it appears near the US 1/US 401 split in Raleigh. Vehicles on the left-hand side are traveling southbound.Route Description

Capital Boulevard begins at the north side of Downtown Raleigh at the convergence of southbound Dawson and northbound McDowell Streets. The six-lane urban boulevard carries US 70/401/NC 50 north, squeezed between two rail yards. Capital Boulevard has an interchange with Peace Street and another with Wade Avenue, where US 70 and NC 50 leave Capital to connect to Glenwood Avenue. The roadway turns to the northeast as interchanges with Fairview Road, Wake Forest Road, and Atlantic Avenue follow. The northbound and southbound lanes split as the roadway briefly follows Pigeon House Branch through an industrial area, then merge back together at Crabtree Boulevard. At an interchange with I-440, US 401 is joined by US 1 and Capital widens to eight lanes with sidewalks and numerous signalized intersections. Development between Interstates 440 and 540 is almost exclusively commercial, featuring numerous strip malls and car dealerships. Midway between the two interstates, US 401 leaves Capital Boulevard to follow Louisburg Road, and US 1 continues north along Capital Boulevard, reverting back to six lanes. The roadway then passes by Triangle Town Center as it approaches its interchange with I-540. North of 540, Capital Boulevard transitions to a four-lane arterial road at its intersection with Durant and Perry Creek Roads. The roadway enters Wake Forest after crossing the Neuse River and once again boasts commercial development. Capital Boulevard travels along Raleigh's Wakefield Plantation development before having an interchange with NC 98. The Capital Boulevard designation ends at Purnell Road near the Wake/Franklin County line and US 1 continues north to I-85 in Henderson.

In 2012, the city of Raleigh released its plans for improving the Capital Boulevard corridor between Downtown Raleigh and I-440.  The purpose of the corridor study is to improve the visual appearance of the roadway, enhance capacity, and provide a main gateway into the city center from the north side of the city. The project was conducted in several phases.

In 2016, NCDOT began work replacing two aging bridges on Capital, the first carrying carrying Wade Avenue over Capital Boulevard and the second carrying Capijtal Boulevard across Peace Street. Both bridges, built in 1954 and 1948 respectively, were stated to be nearing the end of their design lives and featured substandard geometry at their respective interchanges. The project redesigned the current trumpet interchange at Wade Avenue and replaced the ramps connecting southbound Capital Boulevard to Peace Street with a "square loop" interchange using Johnson and Harrington Streets. In addition, the Jersey barrier that separated the northbound and southbound lanes of Capital Boulevard was replaced with a grass median. Construction work was completed in May 2020.

Other improvements highlighted in the corridor study include eliminating the Fairview Road interchange by extending West Street to end at Wake Forest Road, extending Six Forks Road from its current terminus at Atlantic Avenue to Capital Boulevard, restoring the Pigeon House Branch floodplain as well as constructing parks and a greenway trail connecting Peace Street to Crabtree Creek Trail, narrowing the median between the Atlantic Avenue/Wake Forest Road interchange and Crabtree Boulevard, and adding landscaped medians and sidewalks where missing.

Capital Boulevard is one of two alternatives being considered for a new Bus Rapid Transit corridor extending from Downtown Raleigh north to Crabtree Boulevard. The service will utilize dedicated bus lanes and prioritize buses at traffic signals. It is currently unknown when GoRaleigh expects to have the service operational.

A separate corridor study conducted by the city of Raleigh involves improving the traffic flow and aesthetic appearance of Capital Boulevard between Interstates 440 and 540. Dubbed the Capital Boulevard North Corridor Study, the efforts began in 2018 with preliminary designs currently underway.

The proposed improvements for Capital Boulevard will transform the roadway into a multi-way boulevard, which will include multiple medians that separate local travel lanes from regional traffic. This configuration will convert most major signalized intersections into interchanges; Huntleigh Drive/Trawick Road, Calvalry Drive, Millbrook Road/New Hope Road, Spring Forest Road, Sumner Boulevard, and Old Wake Forest Road will meet Capital at diamond interchanges while New Hope Church and Buffaloe Roads will meet Capital at a SPUI interchange. Other minor arterial streets such as Old Buffaloe Road and Oak Forest Road will be converted to right-in/right out intersections or grade separations. The study also proposes pedestrian bridges and an urban grid street plan similar to that of Downtown Raleigh; bus rapid transit will be considered as well.

US 1 Corridor Improvements in Raleigh and Wake Forest

Due to rapid growth in northern Wake County, NCDOT is proposing upgrading US 1 to a six-lane median-divided freeway from I-540 in Raleigh to Purnell Road in Wake Forest near the Wake/Franklin County border. The $747 million project will require restricting access to neighborhoods and local businesses to frontage roads, some of which have yet to be built. Construction on the southern mile of the freeway will begin in 2025, with the remainder of the project scheduled to begin construction in 2027. The freeway proposes interchanges at: