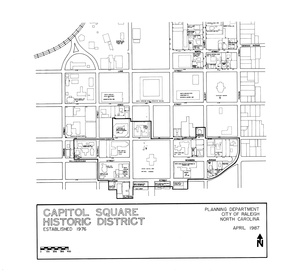 The most prominent building in the Capitol Square Historic District is the State Capitol, a Greek Revival granite building dating from 1840. However, the park square and surrounding street plan are actually much older than the capitol building, dating from a 1792 plan drawn by surveyor and legislator William Christmas. His plan for Raleigh included a city of a single square mile, with Union Square at the center surrounded by four smaller park squares. Main streets at each compass point extend out from Union Square; those streets were Halifax, New Bern, Fayetteville, and Hillsborough Streets. New Bern and Hillsborough Streets, the two east-west streets in the plan, form the spine of the Capitol Square district. The State Capitol stands at the center of Union Square, surrounded by memorials and statues. Concrete walkways meander throughout the open space of the square.

The Capitol Square Historic District embraces the oldest section of Raleigh. The city was established and laid out in 1792 and the original street plan remains from that period. The oldest surviving buildings also date from the end of the eighteenth century: Haywood Hall, a Georgian-Federal house begun in 1792 and the White-Holman House, a tripartite Federal house built around 1799. The 1813 State Bank of North Carolina that stands nearby is North Carolina's oldest surviving financial building.

The 1840 State Capitol and the 1854 Richard B. Haywood House are both Greek Revival structures, reflecting the popularity of that style in the mid-nineteenth century. Christ Episcopal Church and First Baptist Church also date from the mid-nineteenth century; both are Gothic churches but they differ substantially in appearance. Other churches in the district date from the early twentieth century, including the Gothic-style First Baptist Church on South Wilmington Street, notable for its association with an African American congregation.

Aside from the Capitol, government buildings date from the late-nineteenth century through the mid-twentieth century. These substantial buildings reflect the character of the Capitol with granite facades and Classical detailing. The 1888 Labor Building (originally the Supreme Court and State Library Building) is the oldest of the district's collection; the 1950 Highway Building is the newest. The remainder, dating from the early twentieth century, illustrate the state's growth during that period.

A few properties document the historic preservation movement. The 1799 White-Holman House was moved to its current location to prevent its demolition. The city stopped using the 1887 Raleigh Water Tower by 1924, and Raleigh architect William H. Dietrick rehabilitated the tower in the 1930s and made it his office. In 1963, Dietrick deeded the tower--with preservation covenants--to the state chapter of the American Institute of Architects.