Located on the north side of Tryon Road adjacent to the Norfolk and Southern Railroad right-of-way, the Carolina Pines Hotel stands as a reminder of the early 20th century resort hotel movement in North Carolina. Opened on July 23, 1933 the hotel and surrounding 450-acre resort was the dream of Herbert Anderson Carlton, a local developer who wished to provide an idyllic retreat and recreational opportunities for well-to-do patrons, as well as people of ordinary means. To this end, he constructed the handsome Colonial Revival-style hotel building in the midst of a pine grove, and laid out two 18-hole golf courses, a riding club with 35 saddle horses, four tennis courts with night illumination, a lake and a swimming pool, a casino, an outdoor theater, polo grounds, a fishery, a pet farm, and girls’ and boys’ camps. 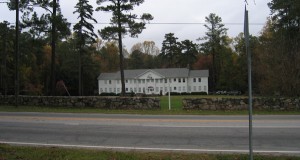 Although the Carolina Pines Resort and Hotel was modeled on similar North Carolina resorts such as Southern Pines in Moore County and the Grove Park Inn in Asheville, it presented a somewhat novel idea in that it promised choice recreational activities and luxurious accommodations for citizens of all classes at an affordable price. This was Mr. Carlton’s philanthropic philosophy, and was reflected in the interpretation of the Colonial Revival style of the hotel building. Mr. Carlton used the easily recognizable style as a vocabulary to convey the virtues of simplicity, stability, and honesty to the Depression-weary citizens of Wake County. Publicity surrounding the 1933 resort opening emphasizes Mr. Carlton’s philosophy by praising him as a true philanthropist who “has considered the times and kept fees down to a point where all may enjoy their favorite recreation.” (Raleigh News and Observer, July 23, 1933) The News and Observer went on to describe Mr. Carlton as “a dreamer who is also a builder. Doubtless, his name will rank high on the recording angels’ list of those who love their fellowmen. But he’s getting part of his reward now, when he basks in the pleasure of those made happy through his endeavors at Carolina Pines.”

Unfortunately, less than a year after the resort’s opening, Mr. Carlton found himself unable to pay his creditors and was obliged to place his company under court-regulated receivership. However, such was his reputation that News and Observer editor Jonathan Daniels testified at the hearing, saying “Since, as you honor said, this is a community affair as well as a legal one, it seems to me that lawyers should join creditors in trying to save Carolina Pines.”

Mr. Carlton lost his interest in the Carolina Pines Resort, but his family, and later other entities, continued to run the hotel and sell off parcels of land until the hotel itself was purchased by the Delta Sigma Fraternity in December, 1957. Today the Carolina Pines Hotel together with a stable and a well house, occupies the residual 7.32 acre parcel that is defined by its namesake pine grove on the north side, and an original stone wall that separates the front lawn from Tryon Road on the south. The hotel building is a designated Raleigh Historic Landmark, and as such, serves as an important reminder of the resort venture that first focused the Raleigh powers-that-be on the city’s southern environs.