Commercial cellular telephone service arrived in the Triangle when the wireless network of ‘Cellular One of the Triangle’ went into service in the wee hours of Monday, September 16, 1985. On that day, the Triangle made wireless telecommunications industry history: it became the first market in America where an independent, entrepreneurial start-up company beat the much larger and far more advantaged incumbent landline telephone monopoly in the race to launch commercial cellular telephone service.

In 1985, Cellular One of the Triangle's administrative office was at 900 Perimeter Park Drive in Morrisville, and its Mobile Telephone Switching Office was on Strickland Road near Lead Mine Road in North Raleigh.

Because it had immediate access to network infrastructure, the incumbent telephone company held a natural advantage regarding ‘speed to market’ and thus could activate its network well in advance of the independent carrier. For this reason, the first cellular network in every single American metropolitan area before Raleigh-Durham was that of the existing ‘landline’ telephone company.

The ‘non-wireline’ cellular licensee was “Carolina Metronet”, doing business as “Cellular One of the Triangle”. Carolina Metronet was a division of  The Providence Journal Company (PJC) – a substantial, family-owned company that published Rhode Island's capital city daily newspaper. The firm also owned paging licenses (including popular Carolinas paging carrier Dial Page). PJC landed the Raleigh-Durham MSA cellular license via the government’s lottery process and proceeded to do business as ‘Cellular One of the Triangle’.

To beat its competition on the air, Cellular One of the Triangle executed a fast-track strategy that focused on utilization of local resources and skillful cultivation of business connections to construct its network in record time. For instance, while United TeleSpectrum's network utilized a conventional  Motorola,central switch and radios made elsewhere, Cellular One of the Triangle deliberately selected more costly infrastructure -- that made by a prominent Research Triangle Park employer Northern Telecom. Many former Nortel employees in the Triangle will recognize the central switch model chosen: the well-regarded DMS-10-C. (Within three years, the switch would be upgraded to Northern Telecom's more robust DMS-MTX-C.) With Northern Telecom being such major employer in the market, Cellular One quickly became the ‘local’ cellular provider of choice in the Triangle.

Conventional technology at the time called for linking a wireless network's scattered cell towers to its switch via dedicated, hard-wired telephone trunk lines. However, because it was not the incumbent carrier anywhere within its territory, Cellular One faced considerable lack of cooperation from area landline providers regarding their provision of key network connections. Because the response by telephone operators to Cellular One's standing orders to activate  trunk lines in between its switch and towers was delayed repeatedly, it forced Cellular One to shift to a technical bypass strategy that ultimately enabled the carrier to beat its competition on the air. Instead of waiting weeks and weeks for the landline carriers to deliver trunk line connectivity site by site, Cellular One installed a series of wireless microwave hops among the tower network to deliver captured cellular traffic for processing at the central switch. From there, the wireless network's entire call traffic was delivered into the wordwide telephone network via a dozen T1 trunk lines.

During the summer and early fall of 1985, as the initial nine-tower wireless network was constructed, an ambitious campaign of full-page ads in the Raleigh News & Observer and Durham’s The Herald-Sun supported a series of radio spots that presented weekly progress reports to the marketplace. The campaign theme was "Excitement is Building", and it noted that Cellular One would 'forever change the way the Triangle does business'. It did, indeed.

Sensibilities of the Era

Much has changed since Cellular One arrived on the Triangle business scene. In 1985, fax machines were considered an oddity, nearly every office had a receptionist answering the phones and taking callback messages (voice mail was just a high-priced option available only with landline telephone service). ‘Pay phones’ were on most street corners, and the digital voice pager was considered 'high tech'. All cellular networks were analog, and most cellular phones were vehicle-installed models complete with a coil cord handset. Eventually, the signature curlicue external antenna on one’s vehicle became a status symbol. The 'Bag Phone' did not arrive until toward the end of the decade, and it was not until the 1990s before hand-held devices became more common than car phones.

In the summer of 1985, a cellular car telephone cost $2,000+ installed, and 'peak' airtime cost as much as $.60 per minute. Unlike today, wireless service was not ubiquitous. And because so few transmission towers were in place, dropped calls, crosstalk and static were not uncommon. Because of the expense, relatively few outside the business community could justify such an expense; indeed, many years would pass before the product would evolve into the everyday consumer commodity it has become today.

Still, there existed a pent-up demand for mobile telecommunications. Early on, this technology was marketed as a business productivity tool. Early adopters of ‘car phones’ were real estate developers and other road warriors who needed to convert their frequent trips from travel time to business time.

Throughout its five-year history doing business in a duopoly environment and before it was acquired by industry titan GTE Corp., Cellular One consistently maintained market share. approaching 70% in large part because it successfully executed a very aggressive marketing/advertising strategy that reinforced the firm's deep connection to the RTP community.

Cellular One of the Triangle was tapped by many high-profile events to serve as the 'official cellular provider'. Events included early editions of the Duke Children's Classic and Rex Classic golf tourneys, the NC State Fair held at the NC State Fairgrounds, the NFL preseason exhibition games held at NCSU's Carter-Finley Stadium and UNC’s Kenan Stadium, all three local Atlantic Coast Conference athletic programs, the State Games of North Carolina, and the 1987 U.S. Olympic Festival. 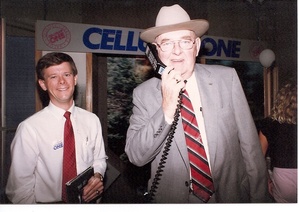 Longtime NC Secretary of Agriculture Jim Graham regularly stopped by the Cellular One of the Triangle booth at the North Carolina State Fair to make a call. (Circa 1986)Since its employees did not labor under a telephone company’s ‘monopoly mentality’, independent carrier Cellular One forged unique collaborations with Triangle media outlets and used creative ways to set it apart. Early on, the firm collaborated with market-leading rock & roll station WRDU-FM 106.1 to produce a very popular traffic reporting program that predated the helicopter-enabled rush-hour traffic report services: the 'Cellular 106 Traffic Corps'. Cellular callers dialed *106 to report traffic tie-ups to the station's on-air DJs. (Note: This was a time when westbound I-40 ended at Durham Freeway/NC 147, and the highway was just two lanes each way.)

Cellular One was a strong partner with all of the Triangle’s ACC sports programs. In collaboration with WZZU-FM 93.9, Cellular One of the Triangle created the ‘Cellular One-94Z Sports Hotline’. By dialing *94, Cellular One customers would hear UNC broadcasting legend Woody Durham deliver a custom daily recap of sports scores. Every NCSU basketball game held at  Reynolds Coliseum and virtually all the events held at Carter-Finley Stadium were coordinated by staff carrying Cellular One portable and bag phones. Circa 1988, Duke basketball coach Mike Krzyzewski recorded a memorable television commercial aired regionally during halftime of the ACC Basketball Tournament. During the peak of his success as NCSU's basketball coach Jim Valvano recorded Cellular One television spots that aired during State's weekly football coaches shows. (An account that describes production of the Duke and NCSU television commercials is described here.) And, in an early effort to encourage highway safety, Cellular One of the Triangle led a campaign for all NC cellular network operators to implement what eventually became a statewide toll-free emergency call to the North Carolina State Highway Patrol. 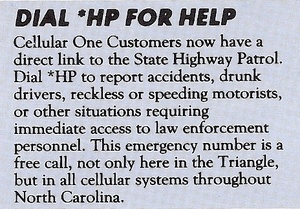 (Circa 1987 customer newsletterCellular One of the Triangle utilized a sales distribution strategy that ran counter to conventional industry wisdom. While United TeleSpectrum and most other cellular companies pursued new business primarily through a team of direct sales employees, Cellular One deliberately deployed a 100% indirect sales distribution model. It formed working relationships with leading, locally owned businesses in the Triangle -- many which were equipped with installation facilities. At the time, key locally-owned businesses that represented Cellular One as dealers included Radio Communications of Cary, Womack-Knight Electronics, Johnson Communications, Sounds Impossible, and Woofer & Tweeter.

In 1990, Cellular One of the Triangle and its sister properties were acquired by GTE Corp. to become 'GTE Wireless'; about ten years later, GTE Corp. merged with Bell Atlantic to form Verizon.

Through a series of mergers and acquisitions in the 1990s and 2000s, 'United TeleSpectrum' operated under several names that included Centel Cellular, 360 Communications, and finally Alltel Communications. In 2009, Alltel Communications was acquired by Verizon Wireless. The impact of the merger on the Triangle market was significant. On one hand, area consumers had one less choice for wireless telephony. On the other, two essentially redundant CDMA networks were combined, leading to a markedly better network quality offering by Verizon Wireless.

Today, Verizon, AT&T, and Sprint are the primary choices for consumer wireless telecommunications in the Triangle.

Founders of Cellular One of the Triangle

Despite its high profile and wide market appeal in the early years of this nation's cellular industry, the ‘Cellular One’ trademark name is long-forgotten today. Yet, in 1985, "Cellular One of the Triangle" made wireless telecommunications history right here in the Triangle.