Lisa Parr works on restoring the old carousel at Chavis Park in downtown Raleigh, NC on April 3, 2013. Here she paints one of the ladies on the chariot seats. It is slated to reopen on April 20, 2013. Parr also did restoration work on the Pullen Park carousel.

Raleigh’s Chavis Carousel, newly restored, could attract crowds like in the old days

RALEIGH — For years, the carousel at Chavis Park has been the city’s other historic carousel, the one relatively few people have seen.

While people stood in line to ride the painted wooden animals at Pullen Park, even before the new carousel house opened there in 2011, less than two miles away, the Chavis carousel was never busy. There were times when its carved horses would carry no more than 15 people in an entire summer day, said David Shouse, senior park planner for the city.

Shouse and others hope that imbalance will soon change. The Chavis carousel reopens later this week, shiny and fully restored, in a new house of its own, the result of a project that will cost more than $2 million.

The glass-walled building, with an opaque roof that will glow at night, will be visible from Martin Luther King Jr. Boulevard in a way that the city hopes will draw more people into the park.

“It’s a much more visible location, which was the inherent problem with the carousel being over where it was,” Shouse said. “People didn’t know it was there.”

City officials promise that the new carousel house is just the first step in a comprehensive overhaul of Chavis Park that they hope will transform it into more than the sleepy neighborhood gathering place it has become. Chavis sits on the edge of a fast-growing and transforming downtown, and people who love the park say it could draw people from throughout Raleigh and beyond, the way Pullen Park does.

Last year, the city launched the Chavis Park Community Conversation and appointed a 22-member committee to develop a new master plan for the park. The committee will use the opening of the new carousel house this week to invite people to share their ideas and dreams for the 30-acre park.

If the effort succeeds, it will have taken Chavis Park closer to its roots. When the Works Progress Administration built the park for blacks during the Great Depression, it drew crowds of people from all over Eastern North Carolina to swim, play and relax in the kind of place that segregation normally denied them.

James Williams remembers coming to swim and ride the carousel at Chavis as a boy in the 1930s and 1940s from Goldsboro, where his church Sunday school organized outings to the park.

“Chavis Park was one of the drawing cards for attendance to Sunday school,” said Williams, a longtime Raleigh resident who is now in his 80s and is a member of the Chavis committee.

The revitalization of Chavis also may satisfy Southeast Raleigh residents who say the city has neglected the park over the years, helping to bring about its decline and the carousel’s relative obscurity.

“It was looked at as the park for blacks for this area,” Williams said. “What we’re looking at now is ways we can reinvent it.”

By the time it was dedicated in May 1938, Chavis had a large swimming pool and bathhouse, a baseball diamond and football field, playgrounds, picnic grounds and, under a canvas tent, a “No. 2, Special Three Abreast” carousel made by the Allan Herschell Company of North Tonawanda, N.Y.

It was built sometime in the late 1910s or early 1920s as a traveling carousel, to be taken apart, moved to the next town and reassembled. After the city bought it for $4,000 in 1937, it was not taken apart again until last year, when the pieces were sent to Ohio to be refurbished.

Unlike the larger Pullen carousel, with a menagerie that includes rabbits, cats and ostriches, the Chavis ride was all wooden horses (some with cast aluminum legs), with glass eyes and bared teeth, each a “jumper,” going up and down as the carousel went around. There also were two decorated wooden benches, including one known as the “mother’s bench” directly behind a row of four small aluminum horses for little tykes.

The carousel stood in a prominent location just inside the park’s main entrances off of Worth and East Lenoir streets. The tent was replaced by a wooden pavilion sometime in the 1940s, and Chavis thrived. Crowds came for dances, swim meets, minor league baseball games and football and baseball games for nearby Shaw Institute and St. Augustine’s College.

During World War II, barracks erected in the park housed black troops. Later, a fighter plane was erected and used as a slide, and in the early 1950s, a miniature train was built, carrying people around the periphery of the playground area.

“That’s when the park was really vibrant,” she said.

Lonnette Williams, who lives just outside the park with a view of the old carousel house, also watched the park decline. As the end of segregation gave blacks other options, Chavis stopped drawing people from great distances. And as crime from the neighboring Chavis Heights public housing complex spilled into the park, people began avoiding it, she said.

“In the ’70s, after Chavis Heights got to be so infested with drugs and other problems, people stopped going to it,” she said.

Lonnette Williams and others blame neglect by the city. She thinks the decision to fill in the original swimming pool and replace it with something smaller hurt, and she says the carousel had no posted hours and was often closed.

“We never knew when it was going to be open,” she said.

The public housing complex was razed several years ago, replaced by a new development that mixes public and market-rate housing. Young families are moving into the neighborhood, Lonnette Williams said, and crime is not the concern it once was.

Lonnette Williams fought the city’s decision to move the carousel from its historic spot. She thinks the more visible location is too close to busy Martin Luther King Jr. Boulevard, where children might get hit crossing the road.

But others on the committee disagree. Rob Wylie says the new location, close to the pool and the Chavis Community Center, will help increase ridership.

“I think it’s more important for people to use it than to preserve it in that old building,” he said.

Wylie represents a newer generation of residents who care about Chavis, too. He’s 33 and has lived on nearby Cabarrus Street for seven years. His daughter is 21/2, and he’d like to see the park’s playground improved.

Jackee Howell, 34, is also a relative newcomer to the neighborhood, moving from Boylan Heights a couple of years ago. Howell says the committee wants to see the old carousel house used in a thoughtful way, perhaps as a museum or a performance space.

But she expects people will quickly come to love the new carousel building in its new location.

“It’s just breathtaking at night, all lit up with the skyline in the background,” she said.

The city spent $1.8 million on the new carousel house, and another $266,000 to restore the carousel and its band organ, said Richard Costello, the amusements director for the city parks department. That doesn’t include the ongoing cost of repairing and repainting the horses, Costello said.

The restoration of the Chavis carousel meant replacing some worn parts, including the motor and the electrical system. Once the carousel had been dismantled and taken to Ohio, restorer Todd Goins discovered that the thick, wooden center pole, from which the rest of the ride is suspended by steel cables, had developed a large crack and couldn’t be saved. Goins made a replica.

The carousel had also developed a wobble of as much as 18 inches, which wouldn’t work with a new handicapped ramp. So the old wooden deck has been replaced with one that is solid and true.

Being inside, in a climate-controlled environment with a concrete floor, will help keep down the mold and dust that preyed on the carousel in its old house. But the new building, with its year-round hours, will mean another kind of wear and tear: more riders.

“Probably it may last as long, but maybe not as long, because more people will be riding it,” said Lisa Parr, the artist from outside Chicago who has painstakingly restored and repainted the horses in recent years.

Parr has been restoring carousel animals for 30 years and began working on the animals in Raleigh, a few at a time, in 2001. She particularly loves the glass eyes on the Chavis horses and the way the light glows through them.

She was in town earlier this month putting the finishing touches on the horses, some of which had merely been in storage since she last worked on them. Simply moving them around was enough to require some touch-up work.

“Nicks and scrapes and damage happens no matter how careful you are,” she said.

Parr understands that if all goes as planned, there will be plenty of nicks and scrapes to come, from countless riders of all ages climbing on and off these nearly 100-year-old painted wooden horses. She’s OK with that.

“I love seeing them enjoyed,” she said. “And I’m just astounded and so pleased that Pullen is just thronged. And I hope the same thing happens here.” 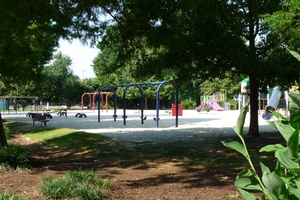 Pullen Park is known for its carousel, but many people don’t realize that there’s another antique carousel in downtown Raleigh. Historic Chavis Park, about 2 miles east of Pullen, has been home to a carousel since it was sold to the city for $4000 in the 30s. The carousel was made by the Allan Herschell Carousel Factory and sports a Wurlitzer #146a band organ with an ornately carved face.

Named after John Chavis, an African-American educator and theologian, the park was built in the 1930s by the Works Progress Administration. It its heyday, the park boasted an Olympic-sized pool, a replica of a Tuskegee Airman-style plane and a train similar to Pullen’s. Cab Calloway was filmed during a visit to the pool while in town to play a show at Memorial Auditorium. The city has faced criticism in recent years as city funds have been allocated to other parks, with the perception that Chavis Park has been left to languish.

In 2006, a striking piece of public art named Glimpses of the Promised Land was added to the park. Made from recycled steel beams, stainless steel hospital trays and an old truck axle, Carrboro artist Mike Roig‘s kinetic structure greets visitors at the park’s main entrance. Roig says that the sculpture was inspired by the Tuskegee Airmen. The piece was purchased with money from the city Arts Commission‘s Red Wolf Ramble project. 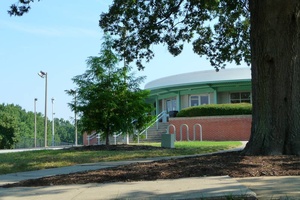 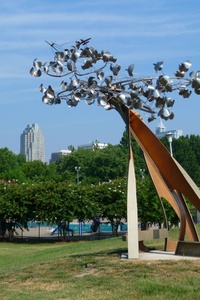 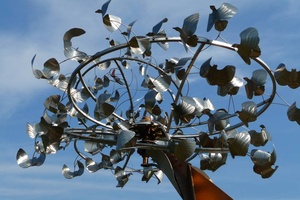 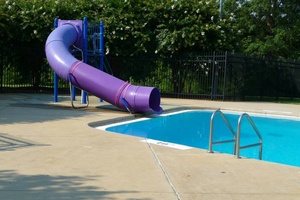 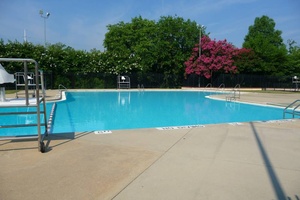 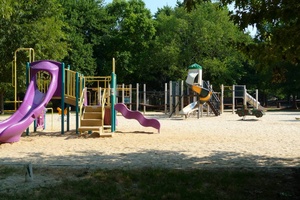 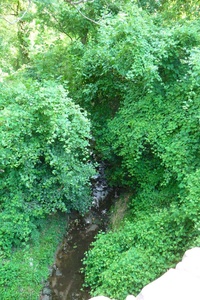 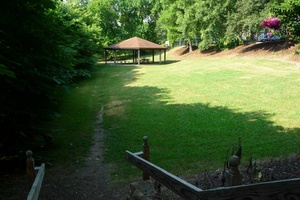 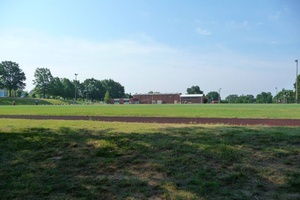