One of only a few early plantation houses in Wake County, the Crabtree Jones House sits on a wooded hill overlooking downtown Raleigh. A handsome two-story Federal-style home with symmetrical one-story wings, the home is clad in molded weatherboard and features late 18th-century architectural details: two Flemish bond chimneys, a modillion cornice, molded door and window frames, six over nine windows, and a six-panel front door. Interior features include flat-paneled wainscoting, Georgian-style moldings, and several decorative mantels. Of these, the most impressive is the mantel in the main room, which incorporates well-preserved still life and landscape paintings. A later two-story addition is located at the rear of the house, but it is not clear when it was erected.

The Crabtree Jones House was built by Nathaniel Jones, an early settler of Wake County sometimes referred to as Crabtree Jones or Nathaniel Jones “C.T” to distinguish himself from his father of the same name. In addition to owning over 1,000 acres of land and five slaves, Jones served in the General Assembly and later became a state senator. Upon his death the house went to his son Kimbrough, who continued to run the plantation and also became a state legislator. The house survived the Civil War (although its furnishings did not), becoming a place of refuge for other family members displaced by the conflict. The November 1934 issue of The Progressive Farmer featured the home on its cover; it remained in the family for several generations until it was sold in the early 1970s. A private residence, today the home is surrounded by late 20th-century and early 21st-century residential and commercial development. 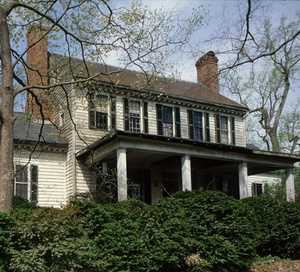