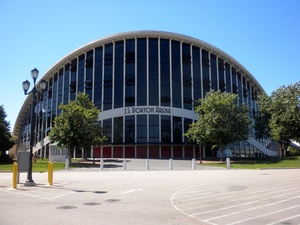 Photo by Julie Jarvis Dorton Arena is a 7,610 seat arena at the NC State Fairgrounds in Raleigh, NC. Completed in 1952, the 25,000 square foot arena holds multiple types of events including music concerts during the state fair, proms and is currently the home base for the Carolina Rollergirls roller derby team.

Dorton Arena was designed by Polish architect Matthew Nowicki, who died in an airplane crash before construction, Local architect William Henley Dietrick supervised the completion of the arena using Nowicki's innovative design. The arena features parabolic design that boldly combined architecture and engineering, earning the building its reputation as an exceptionally significant design. In 1972, Dorton Arena was listed on the National Register of Historic Places. In 2002, the building celebrated 50 years of serving Raleigh and was named a National Historic Civil Engineering Landmark. 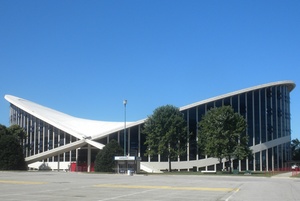