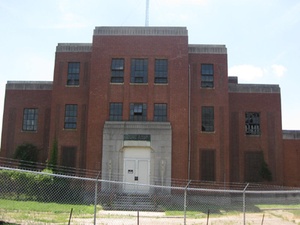 The E. B. Bain Water Treatment Plant was constructed in 1939 – 1940 on the site of the 1887 water treatment plant that served the city of Raleigh. Noted as the most handsome industrial building in the city, the massive brick, tile, and metal Bain Water Treatment Plant was designed by architectural engineer William C. Olsen in a restrained classical/Art Moderne motif. The $700,000 construction of the building was funded by a City of Raleigh bond issue and the Depression-era federal Public Works Administration (PWA).

The nearly eight-acre site located just south of downtown Raleigh contains the massive, elegant brick treatment house and three clear storage reservoirs. The treatment building is entered through the head house into a generously-dimensioned two-story lobby with a mezzanine circling the upper level. The mezzanine is gained by a monumental stair defined by decorative wrought iron balusters and solid oak hand rails. The railings are repeated on the mezzanine that is supported by tall, narrow columns with fluted capitals. The walls of the lobby and mezzanine are finished with ashlar plaster above a glazed tile wainscot, and the floors are red quarry tile. The mezzanine space is illuminated by original segmental-arched doorways with double French doors, sidelights, and transoms, and the building retains original elegant bronze Art Deco pendant lights and wall sconces. In all, building’s proportions and attention to design detail reflected the stringent standards of the 1930s for federally-funded public building projects. As such, it is easy to understand why the Bain Water Treatment Plant is noted as an excellent example of the high level of design for utilitarian structures produced under PWA sponsorship.

Large-scale drinking water treatment started in Raleigh in 1887 on Walnut Creek from which the city’s water supply was drawn. The original operation was undertaken by the privately-held Raleigh Water Company under a franchise granted by the city. After experiencing financial difficulties, the company was acquired by the Wake Water Company in 1901, and upon its insolvency in 1913, the City of Raleigh acquired the water system. Over the next 30 years, as the city’s population grew, additional water sources along Walnut Creek were added, starting with Lake Raleigh in 1914, and then Lake Johnson in 1923. By 1925, the Walnut Creek plant was treating four million gallons a day, and by the 1930s, it became apparent that while the city had an adequate supply of raw water, the treatment plant had to be upgraded to handle it. The city applied for a PWA grant to fund forty-five percent of the $700,000 project, and a city bond issue provided the remainder of the amount. ($700,000 in 1940 equals about $9,314,968 in 2005; quite an undertaking for a Depression-strapped city.) The finished plant was dedicated on June 18, 1940, and named for Mr. Ernest B. Bain who had spent a 40-year career as plant superintendent at the site.

The Bain Water Treatment Plant supplied the city through the early 1960s, when it again became apparent that the city was outgrowing the Walnut Creek water supply. In 1967 the E.M. Johnson Plant on the Neuse River was put on line and the two plants worked in tandem until July, 1987, when the Bain plant was taken out of service. The future of the handsome 1940 building was uncertain until it was listed as a Wake County Historic Landmark in 1996, and several historic preservation-oriented developers vied for the opportunity to develop plans for the adaptive re-use of the complex. Today noted Raleigh downtown developer Greg Hatem owns the property and is considering appropriate uses for it.

Historian Arthur Schlesinger, Jr. noted that the PWA “left behind a splendidly-improved national estate,” a proud part of which is the E.B. Bain Water Treatment Plant in south west Raleigh.