Eno Rock Quarry is located in Eno State Park.  The four acre pond is an abandoned stone pit that was mined by the North Carolina Department of Transportation to construct Interstate 85 between 1960 and 1964. At the end of the quarry’s operation the 60 foot deep pit was filled with water. The pond is ringed by steep sides and offers virtually no areas of shallow water, making it somewhat treacherous for the leisurely visit.

The Eno Rock Quarry is accessible via the Cabe Lands Trail in Eno River State Park. The Park entrance is located on Howe Street in Durham, near the intersection of Hillsborough Road and Sparger Road. State Park rangers monitor the lot at the quarry entrance and will turn away cars once the lot is full.​ There is no parking signs along Howe Street. Additionally, there is parking lot signage warning people to "lock, take and hide" due to car break-ins. To reach the quarry you must hike in about a mile and cross over a small stream. Shortly after entering the main trail entrance from the parking lot there will be a unmarked left turn onto a new trail. Take the first left and follow the trail all the way to the quarry. 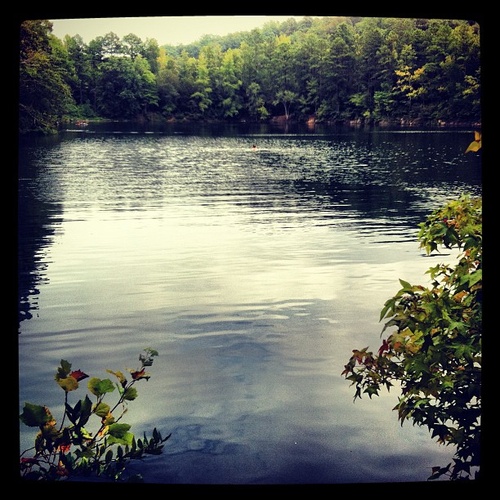 Douglas Vuncannon from Indy dived to the bottom of the quarry in May of 2007.  At 55 feet, Douglas hit the muddy bottom and found the temperature to be a frigid 48 degrees. No sunlight penetrated to this depth, and the water was so murky that it was impossible to see his flashlights at arm's length.​

A University sophomore drowned in 2008. Ian Creath, 18, of Chapel Hill, had declared his major as psychology. He went swimming with a friend in the quarry on July 11, said Charlie Peek public information officer for N.C. Division of Parks and Recreation.​ He cried out for help once and then slipped under the water around 7:30 p.m. while trying to retrieve a raft that was 40 to 50 yards offshore, Peek said. ​

In 2009 visitors were warned by the The North Carolina Division of Parks and Recreation to not swim because of potentially dangerous blue-green algae blooming in the water. Park visitors were told not to ingest the water, keep pets from swimming or drinking it, and not allow children to play along the shoreline. ​

Swimming is not recommended by State Park rangers and it's extremely dangerous for unaccomplished swimmers. Despite the dangers, many people are seen swimming in the hot summer months. You may see plenty of Duke students, since it's only a 15 minute drive from campus. Technically, swimming is not against the law. ​Along the tallest cliffs, located along the trail, is a popular jumping spot for dare devils.

In the summer of 2015 a teen drowned here.  There is no place to stand or touch the bottom of the quarry.  Visitors should bring rafts or flotation devices even if confident swimmers. There are no lifeguards to pull you out if you are in distress.

This is a dangerous place to swim and it is incredibly dangerous to jump off the high cliff. There are rocky ledges and submerged fallen trees below the surface that are not visible. If you want a big jump/dive, go find a pool with a high dive.