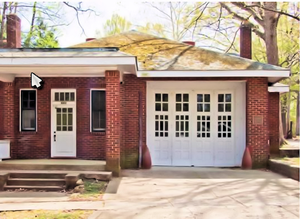 Photo by A. Neifeld, Capital City Camera Club
Courtesy of Preservation North CarolinaThe historic Glenwood Fire Station (Engine Company Number 4, Station Number 4) was erected in 1924 by Raleigh's municipal fire department, which was first organized 1912.  Its construction is designed to resemble the modest bungalows of the Glenwood neighborhood in which it sits -- including dark brick walls, a prominent porch, and a low-pitched roof.  The large doors on the facade access the interior space where the fire truck was stored.  The building exterior remains virtually unchanged since its construction.  However, the former station is now a private residence and no longer owned by the City of Raleigh.