The Grand United Order of Odd Fellows (GUOOF) Building is a brick, three-story utilitarian commercial building that is culturally and historically significant as one of only two known extant buildings associated with African American secret/benevolent societies in Raleigh. The building is representative of the social and charitable structure within the African American community in the years following the Civil War. Built ca. 1880 as a factory, the Hope for All Lodge No. 2645 of The Grand United Order of Odd Fellows acquired the property and installed two storefronts, turning the building into an office and assembly space about 1891. The GUOOF used the building as a lodge until it sold the building in the 1960s. The business use of the building was integrated until about 1915 when black professionals and businessmen occupied the entire building and served the African American community along Raleigh's "black main street." 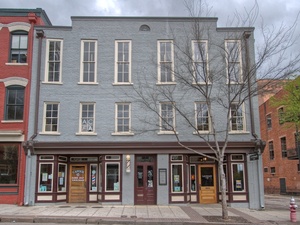