The Honeycutt Creek Greenway Trail project is currently in the design and permitting phase. The trail will extend 5.67 miles, connecting the existing Mine Creek Greenway Corridor to the South Shore Trail on Falls Lake (part of the Mountains-to-Sea hiking trail) via Honeycutt Park. This greenway takes advantage of one of several pedestrian culverts created under I-540 during its construction. 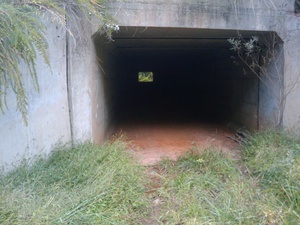 Pedestrian Culvert under I-540

During the planning of this phase of this trail, residents of the Summerfield North neighborhood were vocal in their opposition to the greenway, citing anecdotal evidence that property value would decrease and that the proposed route was unsafe. After making compromises to the existing design, Raleigh's City Council approved the route in March of 2010.

Construction is anticipated to begin November 2012.