Jung’s World Class Taekwondo is a growing taekwondo school on Guess road in Durham. The school opened in 2007, and it fosters significant growth in taekwondo and personal development. The school has a large focus on establishing discipline and promoting an encouraging environment with the teaching of taekwondo. Taekwondo is a martial art that originated in Korea; it has a large emphasis on strong kicks and throws.

The school demands a high level of fitness and promotes learning the curriculum and learning things on one’s own. The school has approximately 110 students ranging from five years old to fifty-five years old. They also have ranging experience in taekwondo. Master Jung encourages students to do work outside of class and develop aspects of their own personal taekwondo, making them better overall. Master Jung is an important figure in the school and the eight first-degree and second-degree assistant instructors increase his effectiveness.

The assistants emphasize making themselves better by having a large amount of friendly competition, especially in the sparring classes every week. Sparring is where two people attack each other with kicks and punches, with a heavier interest on kicks, especially to the head.  The instructors are also very effective and enthusiastic about teaching poomsaes, which are patterns of techniques, to all of the students. 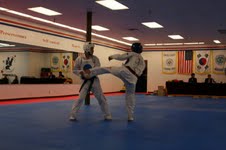 There is a significant incentive for little kids to come and work with the older students. This is because they will have an outlet for their energy. The classes demand that the kids and instructors be physically fit and mentally tough enough to continue, even if they are already tired. The kids have an activity away from school that they can do until they are exhausted.  They also learn a substantial amount, which is partly due to the instructors being in top shape.