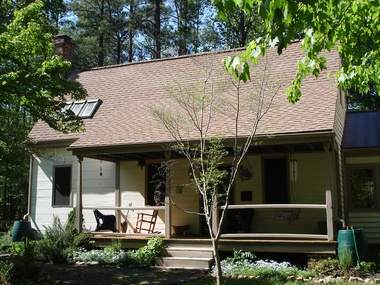 Joseph Lane, brother of Joel Lane, who owned the land upon which Raleigh was founded, built this small Georgian style farmhouse in western Wake County. Joseph Gales, founder of the newspaper Raleigh Register, also once owned the house. Originally located in Regency Park, where the 2000 Regency Parkway Building is now located, the Lane-Bennett Place was bought by developer Jeff Sugg from the house’s 95 heirs. The Cary Historic Society and Preservation North Carolina tried to find a new location for the house in Cary, but failed, so Sugg gave the house to Ruth Little, who moved it to 7408 Ebenezer Church Road in Raleigh. The Georgian-style farmhouse, now a private residence, is one of the oldest buildings in Wake County. An addition was incorporated in the house in the 2000s; it remains faithful to the style of the original house.