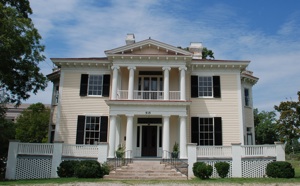 The home was constructed in 1855 for Major Augustus M. Lewis, a state legislator from Louisburg, NC. In 1912, Dr. Charles Lee Smith bought the home, where he lived until his death in 1951. Dr. Smith was one of the most distinguished and respected educators and publishers in North Carolina during the twentieth century. He was a former president of Mercer University, president of the Edwards and Broughton Printing Company, a published historian and a trustee of the University of North Carolina.

The Lewis-Smith House was moved to its current location in 1974 by the State of North Carolina.  The current site of the home used to be occupied by the Josiah W. Bailey House until its demolition in 1960.

Many of the home’s features, including the portico with Doric and Ionic columns, corner pilasters, and window and door surrounds with corner blocks, all came from Asher Benjamin’s classical pattern books for home design that were widely used during the early to mid-1800s. Dr. Smith expanded the house to add two-story bayed conservatories on each side and a large arched window with leaded glass fanlight in the rear of the home. He also added a classical columned screen between the front and rear hall. Four elaborate original gas light fixtures hang in the entryway, though they have since been converted to electricity. Original chandeliers, mirrors, and marble mantelpieces are still located throughout the first floor of the home.