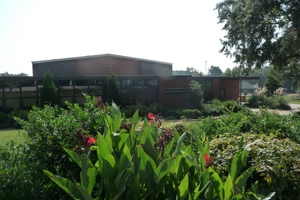 Lions Park was created in 1951 by the City of Raleigh along with other programs and facilities in reaction to a wave of juvenile delinquency and truancy following World War II.  In order to complete the massive project, the City issued a quarter of a million dollar bond issue aimed at purchasing park lands in the area before rapid growth consumed available land. The Parks and Recreation Advisory Committee at the time hoped that civic groups would adopt and develop these sites as they were purchased. The Lions park in downtown Raleigh is one of the first parks to develop out of this plan.

Throughout the 50′s, members of Raleigh’s Lions club donated funds, equipment and man-hours to create the initial version of this beautiful park. It quickly became one of the most heavily-visited parks in Raleigh. The park continues to be updated to meet the needs and interests of the region, even adding a BMX park that has recently been host to a national BMX event. In May of 2010, neighborhood volunteers came together for a community build day and installed a beautiful new playground in the park.

The Lions Park community center hosts programs and houses basketball courts and a weight room. The popular tennis courts and lighted ball fields continue to generate a lot of activity. This is a beautiful park and an active neighborhood hub.