The Merrimon-Wynne house, built circa 1875 for Senator August Merrimon, is a handsome Victorian Italianate suburban villa notable for its strongly molded ornamentation with unusual wood trim depicting gears, bolts and rivets. The two-and-a-half-story frame structure, has two major porches, one supporting a cantilevered wing on the north elevation and another on the right side of the west elevation. 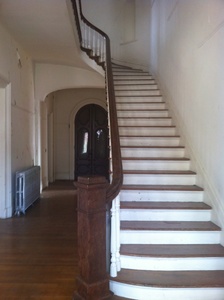 Merrimon was a lawyer and judge who later gained national prominence as a U.S. senator and a state Supreme Court justice. He was raised in western North Carolina and married to Margaret J. Baird, a cousin of Zebulon Baird Vance, later a N. C. governor and senator. Merrimon played a major role in guiding North Carolina through the trauma of the Civil War and Reconstruction.

Upon his death in 1898, the estate was sold to Lula B. Page, stepmother to the ambassador to Great Britain. Mrs. Page remodeled the interior of the home. She resided in the house for a short time before her marriage to J. Stanley Wynne of Raleigh. The Wynnes took a keen interest in the nearby Presbyterian girls’ school, Peace Institute, which is now Peace College. As a result of their involvement with Peace Institute, the Wynne House was deeded to the college for $100 in April 1919. Peace utilized the house as a dormitory, creating the Lula B. Wynne Hall for Girls. It was later used to house home economics classes, a vocal studio and was used as a teacherage. In 1935 the building was converted to a residence for the college president until it became home to the college chaplain in 1960.

The Merrimon-Wynne house is a handsome example of a Victorian Italianate suburban villa. It is noted for its strongly molded
ornament and intricate trim work depicting gears, bolts, and rivets in wood. The home has two major porches, one supporting
a cantilevered wing on the north elevation and nine working fireplaces. In August 2008, the Victorian Villa moved from 526 N.
Wilmington Street to 500 N. Blount Street.