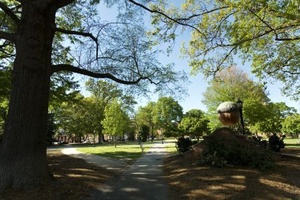 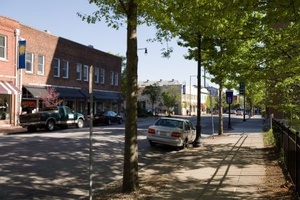 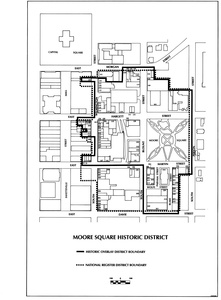 While the district is named for one of the five park squares laid out in the original plan of Raleigh, its character is overwhelmingly commercial. The area is close to south Raleigh's historically African American neighborhoods, and the proximity made the section of East Hargett Street between South Wilmington and South Blount Streets a center of African American-owned businesses. This section of East Hargett Street was known historically as Raleigh's Black Main Street.

Buildings date from the late nineteenth through early twentieth centuries. Reflecting the size of the city around that time, they are small in scale and modest in detailing. An exception is the 1914 Mission-style City Market that faces Moore Square. The building reflects Raleigh's importance in agricultural trade in the early twentieth century.

During the late nineteenth and early twentieth centuries, small-scale commercial development replaced the earlier nineteenth-century residential district that had developed around Moore Square. As Raleigh's business district grew after the end of the Civil War, commercial development spread both east and west of Fayetteville Street, the city's main business thoroughfare.

Businesses lined South Wilmington Street as early as the 1870s. These tended to be saloons, cafes, grocery stores, blacksmiths, bootmakers, and boarding houses. The ca. 1870 Carolina Boarding House at the northeast corner of South Wilmington and East Hargett Streets is one of the older buildings in the district. It operated as a hotel and grocery before becoming a furniture store. For much of the twentieth century, the Italianate building housed the Heilig-Levine Furniture Store.

Another surviving nineteenth-century building, although much altered, is the 1879 Tabernacle Baptist Church at the northwest corner of East Hargett and South Person Streets. Originally a modest brick Gothic Revival church, the building was remodeled into a Romanesque church late in the nineteenth century and back to a Gothic Revival building in the early years of the twentieth century.

The 1914 construction of the City Market south of Moore Square had a profound impact on the streets surrounding the square. The growth of the trucking industry fueled the success of the market, which in turn generated a surge in the number of grocery stores on surrounding streets.

Like many urban neighborhoods in the second half of the twentieth century, the area went into decline in response to the developing suburbs and suburban shopping centers. The last decade of that century and the early years of the twenty-first century have brought a robust resurgence to the streets surrounding Moore Square.