Bell Tower History
A letter from Vance Sykes (Class of 1907) to E. B. Owen, then serving as alumni secretary, is credited with the movement to construct a monument to those alumni killed in World War I. The memorial committee appointed Architect William Henry Deacy to design the tower in 1920. Its blending of Romanesque features and Gothic verticality are reminiscent of the towers of West Point. The 115-foot monument, called "a legend in stone" contains 1,400 tons of stone set on a 700-ton concrete base, and exceeded $150,000 in cost. 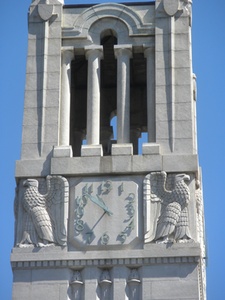 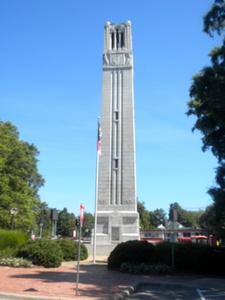 Photo by Julie JarvisThree years after the end of the war the dedications and corner stone laying were held, and the first 10 ft. sections of Mt. Airy granite were added in 1924,1925, and 1926. However, the Great Depression caused fund-raising efforts to fall behind, and the tower could not be completed until 1937 with the aid of the federal WPA. Still, at this time, the clock had not been installed in the tower. The student honor societies and the Class of 38 provided for the clock, while the Class of 39 gave the floodlights.

Finishing details were delayed during World War II, but with funds from students, alumni and foundations; the chimes, shrine room and memorial plaque were completed. It was dedicated November 11, 1949. Professor Carroll Mann was a leader in the effort throughout the three decades of effort. The new carillon in the tower was dedicated in March, 1986 to honor Dr. Carey Bostian, former chancellor and his wife Neita.

Although 33 alumni died in the war, the memorial plaque contains 34 names. Before the Armistice the name G. L. Jeffers, Class of '13, was wrongly reported killed in action. Many years later, however, when the memorial plaque was made, a list was furnished the manufacturer from which Jeffers' name had never been removed. When the error was noted on the finished plaque, a decision was made to alter the extra name beyond recognition. It was therefore changed to G. E. Jefferson, a symbol of unknown soldiers at State and elsewhere. 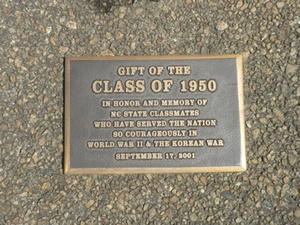