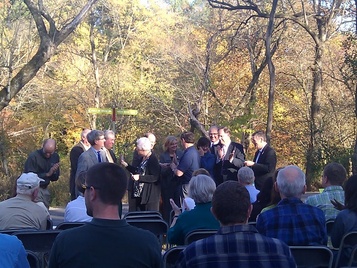 The Neuse River Trail is a paved greenway trail that follows the Neuse River from the Falls Lake Dam to the Wake/Johnston County line near Knightdale. At 27.5 miles, it is the longest trail in the Capital Area Greenway System.

The approximately $30 million project was funded primarily via the 2007 Park and Recreation Bond Referendum that included $15 million for this project. Additional funding has been received from the American Recovery and Reinvestment Act (ARRA), North Carolina Department of Transportation (STP-DA), Town of Knightdale, Town of Wake Forest, and Wake County.

The Neuse River Greenway is currently under construction. The northern-most section was dedicated in November of 2011, totaling 6.75 miles from Falls Lake Dam to the WRAL Soccer Complex (map). The greenway bridge over the Neuse River at the City of Raleigh waste water treatment plant (map) was completed in July 2012. This bridge ispart of the Wake Forest connector trail.

The route was completed in spring 2014.