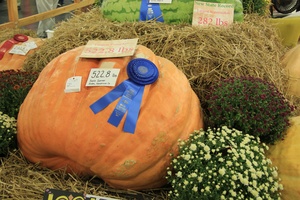 The North Carolina State Fair is an annual agricultural fair held in Raleigh attracting more than a million people each year. The fair offers a variety of agricultural exhibits, food, rides and entertainment in a family friendly atmosphere during its 11-day run in October.

The N.C. State Fair was first sponsored by the North Carolina State Agricultural Society and held at a site east of Raleigh in 1853. The event has been held at three different locations since, finding its current home at the corner of Blue Ridge and Hillsborough in 1928. It has been celebrated continuously since 1853, with the exceptions of 1861 to 1869 (during the Civil War and Reconstruction), 1926 to 1927 (when the Agricultural Society disbanded), and 1942 to 1945 (during World War II).

The original State Fair was founded to improve agricultural practices across the state and educate farmers. The modern fair is an opportunity for farmers to educate the general public on the benefits, uses and importance of agriculture in our daily lives. Fair organizers accomplish this through interactive exhibits such as Field of Dreams and Cultivate a Career, as well as livestock and horticulture competitions open to the public. In addition to the agricultural exhibits, the fair offers families plenty of free entertainment in Kiddieland Fun Park and the Sam Rand Grandstand, an array of musical acts on the Waterfall and Bluegrass stages and the largest Midway in the country.